The Transformation of a Medieval Sussex Vineyard into a Deer Park, a Case Study: The Arundel "Little Park" 1150-1400 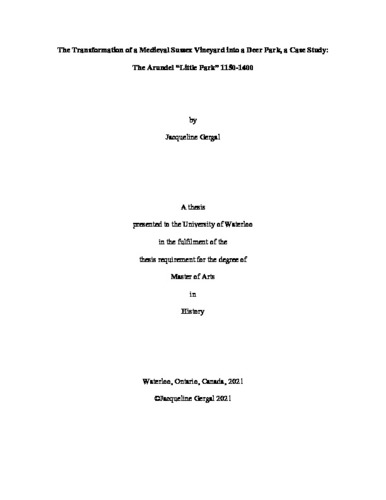 This thesis examines medieval deer parks in West Sussex from 1150-1400 with a thorough case study of Arundel’s “Little Park”. This paper sheds light on the common medieval English practice of imparking to understand its environmental implications, including shifts in landscape management and deforestation, and cultural ideals that shaped medieval hunting practices. As a part of south-east England, West Sussex in the Middle Ages possessed rich and fertile agricultural land, large areas of woodland, and a thriving human population. Located in a prosperous coastal region, the Arundel estate was important because of its proximity to the shores of the continent and its favorable climate. “Little Park,” a former vineyard turned deer park, allows for an investigation into medieval people’s responses to changing climates, social attitudes around agricultural and forestry practices, and provides a unique perspective into the environmental history of medieval Sussex. With the onset of the Little Ice Age around 1300, grapes became difficult to cultivate in England, resulting in changes to landscape management practices. In England, between the mid-twelfth and fifteenth centuries, wealthy landowners embarked upon systematic enclosures of land through a series of imparkments. Due to a cooling and more unpredictable climate, the managers of the Arundel estate decided to convert Little Park into a deer park in 1301. A common trend in the fourteenth century, agricultural land was converted into deer parks and pastoral farmland at an increased rate in comparison to previous centuries since these types of land uses became more profitable and culturally more significant. This thesis approaches the Arundel Little Park from a vantage point of environmental change and transformation to explain the fluid nature of medieval landscapes and how these spaces were frequently modified to remain profitable when faced with variations in weather, climate, and socioeconomic wealth.