The Fantastical World of Playboy 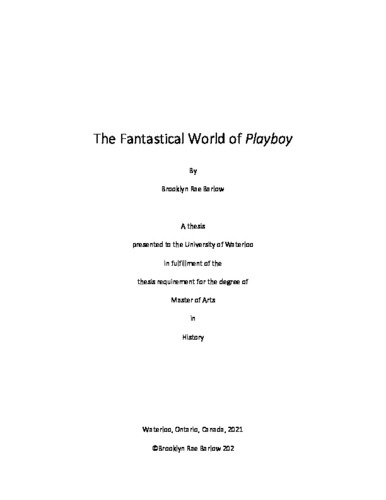 While Playboy was published in the early Fifties its success is arguably reflected through the longevity and survival of the name and logo; as the Playboy Bunny logo and the symbol of Hugh Hefner (specifically dressed in a red robe, silk pajamas, hat and pipe) resonates and is recognized in American society today. Arguably, the success of Playboy represents the successful impact it had on American culture, norms and ways of understanding sex and sexuality. This success is rooted in Hugh Hefner’s ability to create and sell a fantastical world to his readers. Playboy was first published in the 1950s by Hugh Hefner, he dreamed of publishing a magazine that endorsed and liberated American sexuality. His publication both enhanced and coincided with the changing social norms of the 1960’s; which is commonly referred to as the sexual revolution. While Hefner carefully used the changing ideologies and trends in America during the Sixties to reinvent the single American man and woman, he also simultaneously began to establish what I argue to be the fantastical world of Playboy. On the outside, the world of Playboy appeared to both indulge men’s desires and fantasies about women while also empowering women to embrace their sexuality and liberate them from the sexual repression of the Fifties. While the world of Playboy appeared flawlessly fanciful there are ways to understand the manipulative and abusive tactics used by Hefner and his enterprise to maintain the illusion of Playboy. This thesis begins to explore and expose the nuances of Playboy magazine by analyzing the publication of Playboy magazine between 1960 and 1970 that serve to maintain male dominance and the suppression of women. I also explore other published documentation from women who worked for Playboy the during Sixties. In addition, I also interview Victoria Valentino who was both a Playboy Playmate and Bunny in the Sixties. My methodology of research works together in an attempt to provide insight into the world of Playboy that has been otherwise ignored and/or censored in a means of maintaining its fantastical illusion.