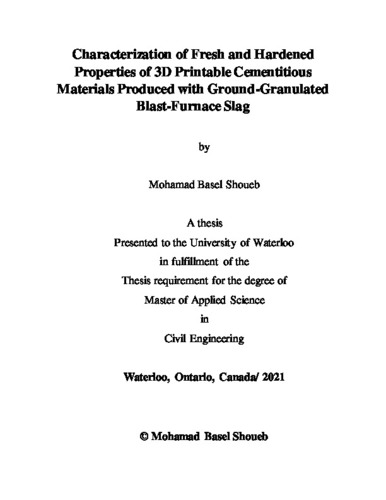 Application of additive manufacturing technology to promote the digital construction practice in civil engineering has been gaining momentum, especially during the past 5 years. To this end, three dimensionalconcrete printing (3DCP) for structural elements has been the focus of several research groups around the globe.A comprehensive review of the existing literature was conducted as the first stage of this study with a focus on the fresh concrete properties, and deposition platform. Review of the literature indicates that in almost all of the published research, fly ash has been dominantly used as the supplementary cementitious material (SCM) in additive manufacturing of concrete mixes. However, fly ash is not domestically available in the majority of Canadian provinces, except for specific west coast areas, and hence is typicallyan imported material from the U.S. Since the fly ash is not a domestic material, its use leads to significant increase in the cost of 3D-Printed concrete mixes in Canada. On the other hand, proper use of concrete admixtures is a key when designing a printable concrete mix. Among the several admixtures that can be used such as accelerators, retarders, water reducers, and air-entraining agents;high range water reducers (a.k.a. superplasticizers) are considered essential. The existing literaturesin this area of technology have not addressed the effect of powder formed high range water reducers on the hardened properties for both castand printed concrete or on the printability. Furthermore, the literature review reports contradictory findings in terms of thecompressive and flexural strengths of castspecimens as compared to those of the printed specimens. In addition to these contradictory reports, the specimen dimensions used for such testing were not large enough to represent the effect of bond strength between the printed layers on the hardened concrete properties. It should also be noted that the stress-strain curves are not provided in almost all the materials published at the time of writing this paper. The lack of such information is considered a hindrance for successful modeling of 3D printed concrete objects using numerical methods such as finite element method (FEM). Developing a high performance 3D printable concrete mixes through the use of the domestically raw materials in Ontario and Canada was set as the primary goal, therefore, Ground Granulated Blast Furnace Slag (GGBFS) had been chosen as a cement replacement along with the use of powder superplasticizers. The experimental results had shown the mixes with GGBFS up to 39% along with a specific range of superplasticizer dosages have resulted in high-performance 3D printable mixes. However, the printed specimens exhibited sever anisotropic material behavior and reductions in compressive and flexural strengths comparing with the castspecimens.In robotic side, the developed platform at the University of Waterloo includes a six-degree of freedom robotic arm, a combined mixer and pump system, a replaceable nozzle connection, and safety cages. The system could be programmed to execute complicated shapes and printing patterns and is synchronized with aduo system to maintain a steady supply of materials proportional to the printing pace and interruptions. The selected system has the capability of being used in both laboratory and actual job site environments. To minimize the materials usage, the system was selected to run on dry ingredients (including sand, cementitious materials, and powder-form admixtures) with the water being added separately. Therefore, the production could be stopped at any point without the need to discard a considerable amount of mixed materials asitcommonly happens in conventional construction practices.