Photonic Three-Level Systems Within the Framework of Generalised Probabilistic Theories 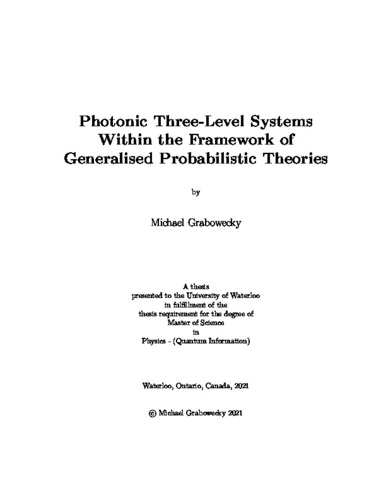 If one seeks to test quantum theory not against a particular alternative but against many alternatives in a landscape of possibilities, it is crucial to be able to analyze experimental data in a theory-agnostic way. This can be achieved using the framework of Generalized Probabilistic Theories (GPTs). A GPT identifies the properties of a physical theory based entirely on what it predicts for the probabilities associated with the various outcomes of measurements in an experiment. The use of the GPT formalism allows one to avoid any biases towards quantum theory that typically arise in conventional practices. In this work, we provide an experimental characterization of a photonic three-level system within the framework of GPTs. First, we outline the relevant background information in quantum mechanics and experimental quantum optics. We then review the basics of the GPT framework and describe how to apply a particular tomographic scheme to our data that we use to characterize our experimental three-level system. This scheme achieves a GPT characterization of each of the preparations and measurements implemented in the experiment without requiring any prior characterization of either. Finally, we perform the experiment and analyze the data to obtain GPT characterizations of our experimentally realized state and effect vector spaces. Our experimental three-level system is encoded in a single photon shared among three modes which are distinguished by their polarization and spatial degrees of freedom. Our analysis identifies that the most likely dimension of the GPT vector space for the realized three-level system is 9, agreeing with the value predicted by quantum theory. We infer the scope of GPTs that are consistent with our experimental data and identify pairs of bounding polytopes of the state and effect spaces, whose shapes resemble those of the quantum mechanical state and effect spaces for a qutrit. From these spaces, we are able to place quantitative bounds on possible deviations from quantum theory. In particular, we bound the degree to which the no-restriction hypothesis might be violated for our three-level system.