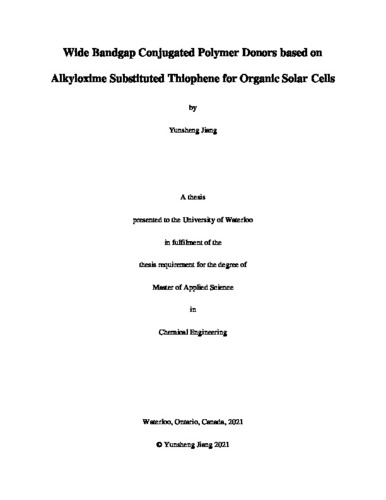 Remarkable progress has been made for non-fullerene based organic solar cells (OSCs), with a power conversion efficiency (PCE) of over 18% having been achieved. Conjugated polymer donors consisting of alternating donor and acceptor units can form complementary light absorption and suitable energy levels with non-fullerene acceptors. Thus, rational design and matching of the conjugated polymer donor with narrow bandgap non-fullerene acceptors (NFAs) is essential for breakthroughs in OSC performance. By incorporating the thiophene unit as a π bridge between the donor unit (BDT) and the acceptor unit (oxime substituted thiophene (TO)), a new wide bandgap polymer donor TTOT was designed, synthesized, and characterized. It exhibited wide optical bandgap of 1.98 eV, and the energy of the highest occupied molecular orbital (EHOMO) of TTOT was -5.33 eV. In addition, TTOT polymer neat film showed a high hole mobility of up to 3.36 × 10-3 cm2V-1s-1. By matching with the non-fullerene acceptor Y6, the as-cast TTOT-based OSC achieved a PCE of 7.65%, JSC of 23.58 mA/cm2, VOC of 0.62 V, and FF of 0.52. However, the incorporation of electron-donating thiophene spaces led to a rise in EHOMO to -5.33 eV, which resulted in the relatively low VOC of the OSCs. To further improve the VOC of TTOT-based OSC, a halogenation strategy was adopted to downshift the EHOMO of TTOT. Two new wide bandgap polymer donors TTOTF and TTOTCl were designed and synthesized by substituting BDT with fluorinated BDTTDFSn and chlorinated BDTTDClSn, respectively. Both polymers have wide optical bandgaps of over 1.97 eV, with EHOMO’s of -5.46 eV (TTOTF) and -5.48 eV (TTOTCl). Then Y6 was chosen as the acceptor to investigate the photovoltaic performance. The best TTOTF-based OSC device showed good device performance with a JSC of 27.61 mA/cm2, improved VOC of 0.72 V and FF of 0.69, resulting in an almost two-fold higher PCE of 13.57% when comparing with TTOT based OSCs. Furthermore, the optimized TTOTCl-based OSC device showed an even higher PCE of 14.91%, VOC of 0.70 V, FF of 0.68 and a record-high JSC of 31.03 mA/cm2 among non-fullerene OSCs. The largely increased FF and JSC are the results of the considerably improved SCLC hole mobility of TTOTF and TTOTCl in OSCs. In addition, the optimized TTOTF and TTOTCl-based OSC devices demonstrated excellent long-term air stability, retaining nearly 80% PCE after 2 months without encapsulation. Lastly, to further improve the device performance of TTOTCl-based OSCs, some future directions are proposed. The first approach is to match TTOTCl with non-fullerene acceptors that have higher EHOMO’s than Y6. As a result, the HOMO offset between donor and acceptor can be reduced, resulting in a lower energy loss and higher device performance. The second approach is to optimize TTOTCl-based OSC through incorporating LiTFSI as a hole transport enhancement layer. The OSCs with a thin LiTFSI layer achieved an excellent PCE of 15.96%, with an enhanced VOC of 0.72 V and FF of 0.71. Further investigations are needed to fully understand the effect and improve the film quality of the LiTFSI layer. This thesis demonstrated the use of thiophene π spacers with fluorine or chlorine substitutions are highly effective for reducing energy loss, enhancing charge carrier mobility, and improving film morphology in OSCs. In addition, the TO-based polymer TTOTCl is a very promising donor material for fabricating highly efficient and air stable OSCs.