Synthesis and Study of the Cyclic Lipopeptide Antibiotics Paenibacterin and Daptomycin 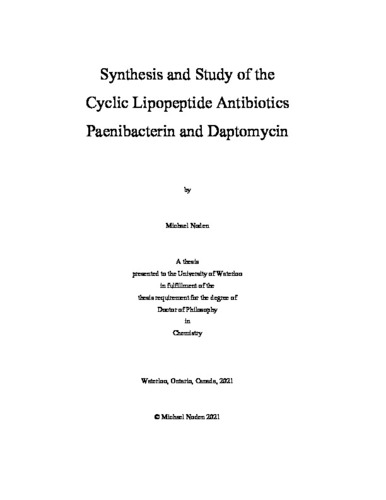 Cyclic lipopeptides present a rich source of antimicrobial compounds with diverse modes of action. Paenibacterin is a cyclic lipopeptide antibiotic produced by Paenibacillus thaminolyticus that exhibits activity against a broad spectrum of bacteria. Paenibacterin’s mechanism of action (MOA) against Gram-negative bacteria is thought to be similar to the clinically useful polymyxins; however, certain aspects of its MOA are still not understood, particularly with respect to its activity against Gram-positive bacteria. To facilitate MOA studies a method for the synthesis of paenibacterin and analogs was developed using solid-phase peptide synthesis (SPPS). One analog was prepared where costly ᴅ-Orn residues were replaced with ᴅ-Lys residues. This analog exhibited activity similar to or better than native paenibacterin and so was used as a scaffold for further analogs. To establish structure-activity relationships (SARs) of paenibacterin, a series of analogs were synthesized and their in vitro antibacterial activity was evaluated. Several analogs were prepared with acyl tails reduced from 15 carbon atoms to 2 carbon atoms in length. Pentanoyl or acetyl tails resulted in loss of activity. Activity against Gram-positive bacteria gradually decreased as the tail length was reduced from 15 to 10 carbon atoms. Activity against Gram-negative bacteria remained consistent with a decanoyl tail. To determine the importance of each cationic lysine residue, they were individually replaced with alanine. Replacing any single lysine residue resulted in at most a two-fold loss in activity. We then prepared analogs with double Lys→Ala substitutions. This resulted in only a two to four-fold loss in activity against Gram-positive bacteria, but activity against Gram-negative bacteria was highly dependent on which lysine residues were replaced. Two fluorescent analogs were prepared, with either a 1-pyrenbutyric acid tail, or a tryptophan residue at position 6. An analog of a paenibacterin B series peptide was also prepared. To facilitate MOA studies of paenibacterin and other peptide antibiotics, two environmentally sensitive fluorescent amino acids were prepared bearing a 7-dialkylaminocoumarin fluorophore. These amino acids were compatible with Fmoc-SPPS and were incorporated into a paenibacterin analog. The interaction of this analog with model membranes, lipopolysaccharide, and bacterial cells was examined using fluorescence spectroscopy and confocal microscopy. Lastly a SAR study was conducted on an analog of the lipopeptide antibiotic daptomycin, Dap-K6-E12-W13. A series of substitutions were made at positions 8 and 11, and their effect on in vitro antimicrobial activity and calcium-dependent membrane binding was determined. Cationic residues were well tolerated at these positions, and these analogs exhibited good activity and membrane binding at low calcium concentrations. When the same substitutions were introduced into daptomycin, they increased antibacterial activity.