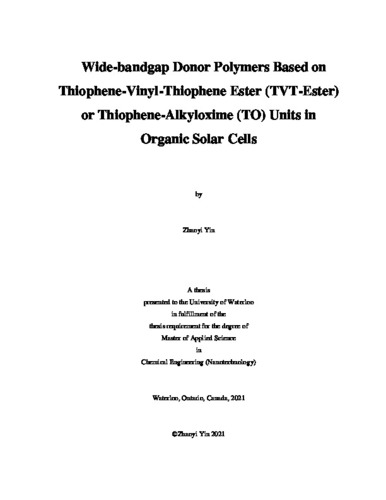 The organic solar cells (OSCs), a branch of the third-generation solar cell as a viable future energy resource has received a lot of attention in lab and industry today. The OSCs have advantages of low cost, light weight, flexible, and roll-to-roll printing for large area manufacture. The bulk heterojunction structure (BHJ) is wildly accepted in the active layer of OSCs, which is a blend film of donor polymer and acceptor material for efficient charge transfer. Recently, the combination of non-fullerene acceptors (NFAs) with wide-bandgap donor polymers as active layer has come to the forefront of OSCs research, which has achieved high power conversion efficiency (PCE) over 18%. In this work, we will introduce donor polymers in D-A copolymer structure, based on benzodithiophene (BDT) or polythiophene (PT) as the donor backbone unit combining with electron-withdrawing sidechains as the acceptor unit. Two novel series of polymers, thiophene-vinyl-thiophene ester (TVT-ester) polymer and thiophene-alkyloxime (TO) polymer based on different electron-withdrawing sidechains, were designed, synthesized, and characterized to function as wide-bandgap donor polymers in organic solar cells. Among the designed TVT-ester polymers, the PEBDT exhibits planar backbone structure, low synthetic complexity, and high quenching efficiency with the non-fullerene acceptors (3PS)2-SiPc and Y6, which is a promising candidate for OSCs. The solar cell device based on PEBDT:Y6 blend film had the highest PCE of 1.23%, with Jsc of 7.32 mA/cm2, Voc of 0.54V, and FF of 31%. The carrier mobilities of blend film were calculated to be 1.37E-6 cm2/Vs and 0.84E-6 cm2/Vs. The low PCE and mobilities were mainly due to poor film morphology with incontinuous network of the blend films. The amorphous property and low carrier mobility of PEBDT could relate to its disordered sidechain packing, so increasing the planarity and rigidity of the backbone maybe beneficial to achieve a more ordered molecule packing and enhanced charge carrier mobility. Further optimized will focus on novel polymer structures by replacing TVT unit with fused ring on the backbone. For the TO based polymers, our group has reported two TO polymers based on BDT and PT, respectively. To further improve the crystallinity of those polymers, two novel polymers based on BDT-terthiophene backbone with alkyloxime side chains substituted on spacing thiophenes were designed by taking the advantages of previous polymers’ structures. The novel polymers P3TOBDT and P4TOBDT both demonstrated wide optical bandgaps and low-lying HOMO energy levels, which can obtain the complementary light absorption spectra and large Voc when blending with acceptor Y6. P3TOBDT neat film achieved a face-on orientation tendency with higher crystallinity than P4TOBDT after thermal annealing, which also exhibited higher SCLC hole mobility. The highest PCE up to 10.17% was achieved based on P4TOBDT:Y6 bland film, which was mostly contributed to high Jsc of 25.95 mA/cm2, indicating the TO unit is a promising acceptor unit on donor polymers. The P3TOBDT:Y6 system exhibited lower PCE and carrier mobilities than P4TOBDT:Y6 indicating the poor phase separation in blend film, which may be due to high miscibility of materials in processing solvent chlorobenzene. However, both systems showed extremely low electron mobilities, resulting from poor interconnecting network of Y6. Thus, there are still large spaces for optimizing the OSC devices, and the improvement of film morphology will be focused in the future direction.