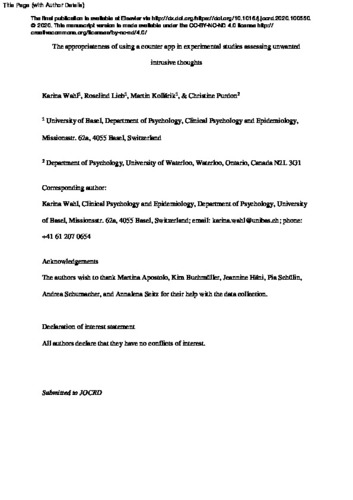 The reliable and valid assessment of unwanted intrusive thoughts (UITs) is crucial. The main aim of the current research was to investigate if individuals who used a counter app (a program on a mobile device that is used to count the frequency of an event by pressing the volume-up button) to assess UITs retrospectively overreported the number of UITs. The secondary aim was to establish preliminary psychometric qualities of the counter app method. A UIT was activated in N = 87 students. They were randomly allocated to one of three experimental conditions: counter app, thought monitoring, or free thinking. Retrospective descriptors of the UIT, including its frequency, were taken. The second study (N = 118) mainly aimed to replicate the results of the first study. In both studies, the retrospective frequency ratings of the UITs were 2–3 times higher in individuals who had used the counter app compared to those in the control conditions. Preliminary indicators of convergent validity and test–retest reliability were good; criterion, discriminant, and predictive validity were unsatisfactory. To conclude, using event marking such as a counter app can result in an overestimation of UITs. Alternative methods of assessment of UITs are discussed.