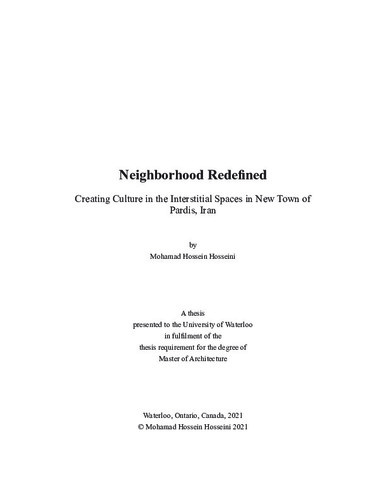 Low-cost housing developments forming “the new towns” adjacent to the metropolitan cities in Iran were aimed to accommodate low-income households. However, after a decade of occupancy, the inhabitants of these towns are struggling with inadequate public facilities to provide human interaction within their neighborhoods. This thesis aims to repurpose the interstitial spaces between the residential towers in the new town of Pardis. The current urban development has created isolated residential point towers which lead to emerging a desolate landscape in the spaces between them, however, the thesis proposes multipurpose social activities and means of connection that encourages social interaction. This research tackles the current issue by examining cultural elements of Iranian neighborhoods and adapting them in the context of the Pardis new town. Precedents of successful existing neighborhoods with similar climate are studied. Subsequently, after analysing the Pardis site in general, a portion of it is chosen as a prototype to investigate the issue in human scale by producing 3D models of the suggested design intervention. This prototypical study could eventually be applied to other neighborhoods in Pardis as well as new towns with similar climate and topographic features to enhance the quality of residents’ social life.