The Viennese Ethos: Delineating the Role of the Ringstrasse Today 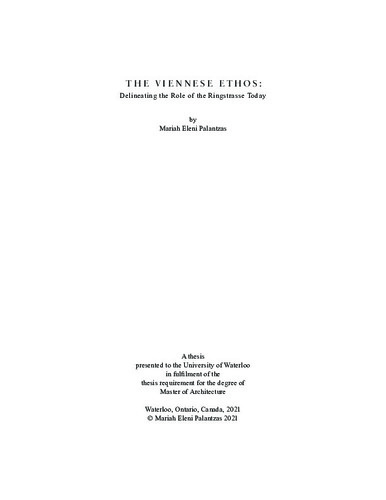 A touch off true North from Vienna’s core, a grand boulevard begins to parade counterclockwise from the Donaukanal, around the Historic City Center until it meets the water once more. Over 160 years after its inauguration, the Ringstrasse, holding seats of government, upscale housing typologies, cultural buildings, urban parks, an imperial forum, and establishments of higher education, continues to effectively serve modern-day Vienna. While there is historic documentation regarding the initial construction and significance of the boulevard, its present importance within the city - apart from its allure as a tourist haven - seems to be overlooked in quotidian life and recent research. This thesis seeks to investigate the current pertinent role of the Ringstrasse as a practical asset but also as a unique preservation of time in the city’s center that is juxtaposed by modern living. By use of analytical mapping, photography, and investigative drawing, the Ring is scrutinized through its openings and edges, contrasting typologies, and the constant process of centralization and decentralization formed by its infrastructures and networks. One must not fail to remember that Vienna’s power and high stature as an Imperial city entering the 20th century was accelerated by and continues to rely upon the unwavering foundation of the Ringstrasse.