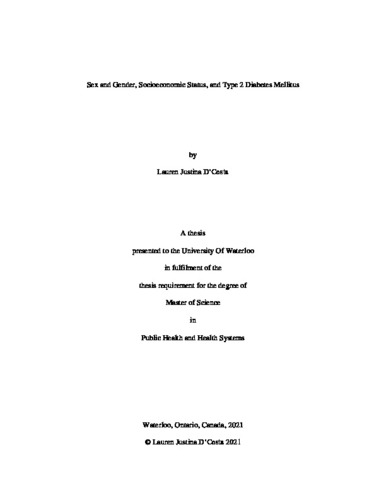 Background: Diabetes mellitus imposes challenges on health care systems, economies, and the individuals living with and at risk for this illness. Diabetes is a major chronic disease and affects more and more Canadians each year (Buysschaert & Bergman, 2011; Public Health Agency of Canada (PHAC), 2011). Type 2 diabetes mellitus (T2DM) potentially impacts all people, but it disproportionately affects those who are disadvantaged socially and materially (Brown, 2004). Low income groups have higher diabetes prevalence rates and are at greater risk of developing diabetes than higher income groups (Raphael, 2011). Literature has also indicated that diabetes is related to sex or gender and ethnicity or race (PHAC, 2011; Chiu, Austin, Manuel, & Tu, 2010). In the differences in diabetes risk between men and women, the social aspects of gender, including differences in behaviours and exposures, might play a role (Kautzky-Willer, Harreiter, & Pacini, 2016). Intersectionality describes how the social aspects of gender and other dimensions of risk, particularly low income, might interact (Dhamoon & Hankivsky, 2011; López & Gadsden, 2016). Sex and gender and socioeconomic status (SES) might be significantly associated with T2DM risk and may interact to affect the odds of developing T2DM. Objective: This study’s objective is to improve our understanding of the relationship between SES, sex and gender, and other sociodemographic and behavioural factors, with diabetes risk. Self-reported T2DM status and measures of SES (including household income, economic family household status, working status, education level, and occupational type) and behavioural factors (including type of smoker, alternative tobacco usage, alcohol intake, physical activity level, and fruit/vegetable daily consumption) and perceived stress level were included to investigate whether self-reported T2DM status was significantly associated with income and sex and gender, even after controlling for economic family household status, working status, education level, occupational type, behavioural risk factors and perceived stress level. Analysis aimed to investigate the risk for T2DM among men and women. Methods: A cross-sectional analysis was completed through multivariable logistic regression analysis with a bootstrapped weighted sample of 77,681 respondents from the Canadian Community Health Survey (CCHS 2015/16). The analytical strategy involved creating two sets of models; one for each of the dependent variables, whether diagnosed with diabetes and the age of diabetes. The first set of models used binary logistic regression to predict the log-odds that an individual was diagnosed with T2DM and included age as a control variable, as well as sex and income, in order to test whether sex and gender and income have independent effects. An interaction of sex and gender and income was included to test whether the effects of income are different for males and females. A second set of models predicted the age at diagnosis of diabetes, among those who had been so diagnosed. Results: Logistic regression analyses showed a significant association between T2DM and household income. Model 1 showed that females were significantly lower risk compared to males, and there was a clear age gradient, with risks higher among older age ranges. Model 2 presented clear evidence of a gradient in risk according to income, with those in the lowest income decile having nearly 75% higher risk than those in the median deciles and those in the highest income decile having about half the risk. Model 4 showed that females were less likely to report having T2DM than males and that age remained an important predictor of T2DM when other socioeconomic status, geographic, and demographic variables were included in the model. When health behaviours and stress were added (Model 5), along with the variables in the first models, both sex and gender and elements of SES (income, education, work, and family status) were associated with T2DM, although none of the SES variables, other than education, remained significant. Stratified analysis was conducted for Model 6 (males) and Model 7 (females). In the interaction models, the interaction of age and sex/gender was not significant. In the stratified models, the age dummies had a similar effect for males and females and reflected a generally linear relationship with T2DM risk. For Model 8 (men) and Model 9 (women), health behaviours and stress were added to the models for men and women. Overall, these effects of the demographic and socioeconomic variables in these models were similar to those in the stratified models without the behavioural and perceived life stress variables. Results support that sex and gender and SES may interact to affect T2DM risk. Conclusion: Our results suggest that the two dimensions of social identity¬-sex/gender and socioeconomic position may interact to structure the risk of T2DM and that there are differences in risk of diabetes for men and women. These results emphasize the importance of studying the observable processes that might be leading to and amplifying observed differences in diabetes risk, which are factors such as age, sex and gender, income, cultural/racial background, education, economic family household, occupation, working status, health behaviours, and stress variables. Our study shows why prevention strategies for T2DM should include approaches that combine healthful behaviours and public policy that identify the key role that SES and sex and gender have on the variations found in the prevalence and incidence of T2DM among the sexes.