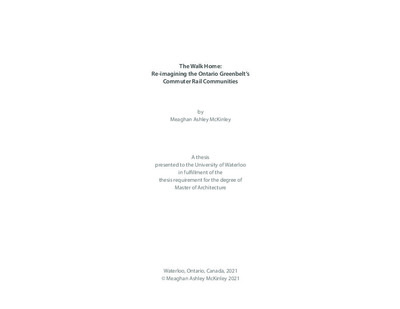 Dominated by a low-density urban sprawl growth model post-World War II, the Greater Golden Horseshoe (GGH) has expanded rapidly without limitation resulting in extensive exhaustion of its open space, greenfield lands, and a mounting pressure to push beyond the boundary of the Ontario Greenbelt to accommodate further suburban growth. The Greenbelt is inundated with proposals by municipalities and developers alike. These proposals threaten to eat up large swaths of productive farmland, destroying forests and wetlands with continuations of the same suburban sprawl, industrial parks along the Metrolinx commuter rail corridors, and the 404 Highway. This thesis is positioned at the boundary between the urban sprawl in the region, and the valuable agricultural and ecological lands protected within the Greenbelt. The work lays out a case study for a new development model based on existing or planned commuter rail stations. The model will seek to preserve and protect the most valuable lands and boundaries of the Ontario Greenbelt from the type of extensive, piecemeal urban development presently nibbling away at its ecological territory and integrity. The design proposes a complete middle density, transit oriented, mixed-use community around Richmond Hill’s Gormley Go station: a station presently isolated in the middle of farmers’ fields accessible principally by the park-and-ride commuter. This thesis presents the argument for a dense, interactive, and walkable community around the station – one that is focused on the vitality of the pedestrian experience