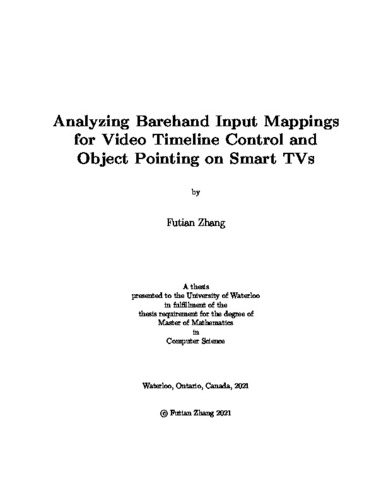 Smart TVs are getting popular in recent few years. Given the emerging feature of distant bare hand control, one challenge is how to perform common tasks with this new input modality. Two tasks are discussed in this thesis including video timeline control task and object pointing task. For video timeline control task, we explore CD gain functions to support seeking and scrubbing tasks. We demonstrate that a linear CD gain function performs better comparing with either a constant function or generalised logistic function (GLF). In particular, Linear gain is faster than a GLF and has lower error rate than Constant gain. Furthermore, Linear and GLF gains' average temporal error when targeting a one second interval on a two hour timeline (+/- 5s) is less than one third the error of a Constant gain. For object pointing task, we design five select strategies to compare the performance, including one Positional based mapping, one Rate based mapping, one Positional + Rate based mapping and two Traditional TV remote style mappings. We picked the first three techniques for our user study. Through a series of experiments, we demonstrate that Positional mapping is faster than other mappings when the target is visible but requires many clutches in large targeting spaces. Rate-based mapping is, in contrast, preferred by participants due to its perceived lower effort, despite being slightly harder to learn initially. Tradeoffs in the design of target selection in smart tv displays are discussed.