The Conceptions of Love and Marriage in German Idealism and Romanticism 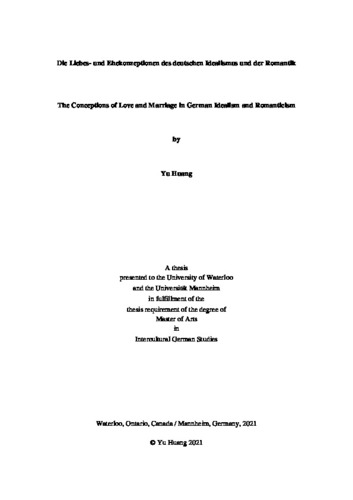 In his Elements of the Philosophy of Right, G. W. F. Hegel considers ethical love the basis of marriage and family, which comprises the state and higher ethical entities. For Hegel, marriage should be seen as an immediately ethical relationship. Although marriage is only discussed in a small section of the work, it is of great importance in Hegel’s overall ethical edifice. In order to capture the deadlocks and dichotomies in Hegel’s account of marriage, I use Lacanian psychoanalysis as the methodology of this thesis, thereby mapping the distinction between ethical and Romantic love and identifying the philosophical roots of the prevailing love conception in contemporary society. Hegel’s philosophy of marriage is primarily formulated against two opponents: Immanuel Kant and the Romantics. This thesis starts with Hegel’s criticism of Kant by paying close attention to the significance of the wedding ceremony in Hegel’s account—an element that both Kant and the Romantics consider to be unnecessary. Through examining the necessity of the wedding ceremony, I elucidate how the third element, or, the higher ethical entity—the big Other—plays a crucial role that irreversibly alters the subject’s identity and social position. Then, I turn my attention to J. G. Fichte’s deductive system of marriage, which lays a critical foundation for the Romantic conception of love. I investigate the relation between subjectivity and objective reality in Fichte’s metaphysics. Moreover, an alternative reading of Fichte’s sexual difference through a detour via Lacanian sexuation is provided. I make the case that the Fichtean distinction between masculinity and femininity can be read as different kinds of desire and enjoyment obtained by male and female subjects. In the final chapter, E. T. A. Hoffmann’s The Sandman [Der Sandmann], in which both ethical and Romantic love are incorporated, is used as a literary example. I use psychoanalytic terms such as transference love, sublimation, idealization as well as the relation between courtly love and masochism to unpack the two loving dispositions in the story. Furthermore, I argue that this story is an example of the perverse relation to the big Other, as the pervert enjoys an instrumental relationship with the big Other and thereby avoids a fully sexual relationship. It should be clear that it is not my aim to impose psychoanalytic terms on Hegel, Schlegel, or Hoffmann: instead, these psychoanalytic concepts offer a framework with which we can systematically define the different positions on Romantic and ethical love, and thereby opening a new vein of the conception of love in contemporary philosophy.