Applications of Entanglement and Nonlocality 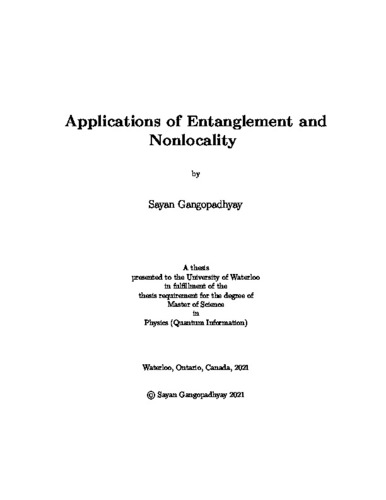 Entanglement and nonlocality are two of the features demonstrated by quantum systems which give rise to new possibilities in a variety of fields such as communication technology, cryptography and the study of fundamental physics. In this thesis, we explore three such applications of entanglement and nonlocality. In the first problem, we show that currently available noisy intermediate-scale quantum (NISQ) computers can be used for versatile quantum simulations of chaotic systems. We introduce a novel classical-quantum hybrid approach for exploring the dynamics of the chaotic quantum kicked top (QKT) on a universal quantum computer. The programmability of this approach allows us to experimentally explore the complete range of QKT chaoticity parameter regimes inaccessible to previous studies. Furthermore, the number of gates in our simulation does not increase with the number of kicks, thus making it possible to study the QKT evolution for an arbitrary number of kicks without fidelity loss. Using a publicly accessible NISQ computer (IBMQ), we observe periodicities in the evolution of the 2-qubit QKT, as well as signatures of chaos in the time-averaged 2-qubit entanglement. We also demonstrate a connection between entanglement and delocalization in the 2-qubit QKT, confirming theoretical predictions. In the second problem, we perform a device independent study of controlled teleportation of a qubit with an untrusted receiver. We construct a device independently testable scenario in a way that allows us to certify in the context of controlled teleportation, whether quantum resources are being used by the device despite the receiver being untrusted. We find in this case that the well known Svetlichny inequality must be violated to certify quantum correlations. While a maximal violation of Mermin's inequality guarantees maximum control power in controlled teleportation with trusted parties, we find that the Svetlichny inequality must be maximally violated to guarantee maximal control power with an untrusted receiver. This indicates that a stronger form of nonlocality is required to device independently test the controlled quantum teleportation with an untrusted receiver. By taking the example of the total depolarized and the qubit depolarized GHZ states, we show that controller's authority is a monotonically increasing function of the Svetlichny inequality violation. We find a window of non-maximal Svetlichny inequality violation where the controller's authority is non-zero. This shows that the controlled teleportation scheme with an untrusted receiver is robust to depolarizing noise present in the device. In the third problem, we study the quantum circuit implementation of a cryptographic object called quantum lightning. Quantum lightning is a strengthening of the public key quantum money scheme. We review an existing construction of quantum lightning, build the quantum circuit implementing an important step of the scheme and identify the difficulties in realizing others.