In Vitro Selection, Characterization, and Application of a Sodium-Dependent DNAzyme and a Metal-Independent Ribozyme 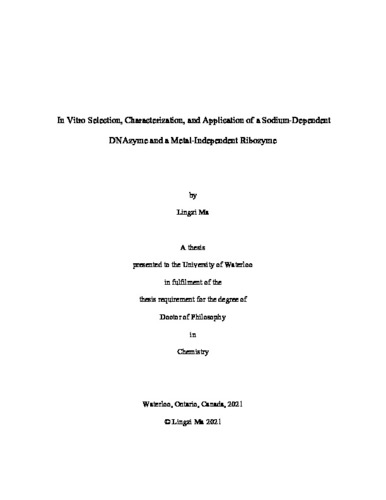 Ribozymes and DNAzymes are collectively called catalytic nucleic acids. Compared to protein enzymes, catalytic nucleic acids are programmable in structure, easy to synthesize or modify, and more chemically stable especially for DNA. In particular, many RNA-cleaving DNAzymes display excellent activities and specificities to metal ions, making them attractive for metal ion sensing. In recent years, several Na+-dependent DNAzymes have been reported, indicating DNA catalysis without divalent or trivalent metal ions directly involved in the reaction. In Chapter 1, I reviewed the current state-of-the-art of the field, and provided the relevant background information regarding to catalytic nucleic acids. In Chapter 2, a new Na+-dependent DNAzyme, NaH1, was selected under a relatively acidic condition, which turned out to be a variant of a previously reported DNAzyme, NaA43. Compared to other competing monovalent ions, NaH1 also displays an excellent specificity for sodium. At low Na+ concentrations, the selected DNAzyme exhibited a higher cleavage rate than NaA43 and thus a tighter binding affinity. Thus, the NaH1 DNAzyme was engineered into a fluorescent Na+ biosensor by labeling a fluorophore/quencher pair. Preliminary work on detecting Na+ in serum matrix was demonstrated as well. This study provides a useful mutant that works in a slightly acidic environment, which might be useful for sensing Na+ in acidic intracellular environment. The NaA43 and NaH1 DNAzymes share the same 16-nt Na+-binding motif but differ in one or two nucleotides in a small catalytic loop. Nevertheless, they display an opposite pH-dependency, implicating distinct catalytic mechanisms. In Chapter 3, rational mutation studies demonstrated conserved nucleotide residues in these DNAzymes. The pH-rate profiles using pKa-perturbed analogs further revealed their distinct general acid-base mechanisms. Further experiments with 2AP modifications and PS-modified substrates provided more insights into the active site. This is an interesting example where single point mutations shift the mechanism of cleavage from general base to general acid, and it can also explain this Na+-dependent DNAzyme scaffold sensitive to a broad range of metal ions and molecules. The Na+-dependent DNAzymes do not require multivalent metal ion for catalysis and can fold into well-defined structures. Thus, they provided an excellent platform for studying the metal ion effect at the cleavage site. In Chapter 4, I used them as models to explore the role of Pb(II) in RNA cleavage which has been frequently observed. By examining the Pb(II) effect in several representative DNAzymes, the capability of Pb(II) to bind specifically to the cleavage site has been demonstrated. Upon binding, the hydrated Pb(II) can serve as a poor general acid and facilitate the RNA cleavage. In a special case, Pb(II) can facilitate the binding of Ca(II) cofactor and significantly enhance the activity of a Ca(II)-dependent DNAzyme. The mechanism study on Pb2+ activity further revealed versatile roles of Pb(II) in RNA cleavage which is important for understanding DNAzyme catalysis. This could also provide insights in rational design of catalytic DNA or RNA with desired cleavage activity. Given the excellent Na+-binding selectivity of DNAzymes, a natural question is whether similar ribozymes exist. In the last chapter, I further performed in vitro selection to search for Na+-dependent self-cleaving ribozymes. Surprisingly, a novel ribozyme was obtained displaying a site-specific cleavage activity under denaturing conditions, such as high temperatures, denaturing solvents, and low salt concentrations. Most importantly, unlike other self-cleaving ribozymes, divalent metal ions do not contribute to the catalysis but suppress its cleavage. Together, I proposed that both denaturants and temperatures facilitate a conformational change favorable to the cleavage activity. In addition, BLAST was applied in searching its natural analogs among genomes. Interestingly, its conserved motif was founded in several extremophilic bacteria. This work further broadened the horizon of catalytic RNAs functioning under extreme environments, and thus provided another strong support for the RNA world hypothesis.

Lingzi Ma (2021). In Vitro Selection, Characterization, and Application of a Sodium-Dependent DNAzyme and a Metal-Independent Ribozyme. UWSpace. http://hdl.handle.net/10012/17422