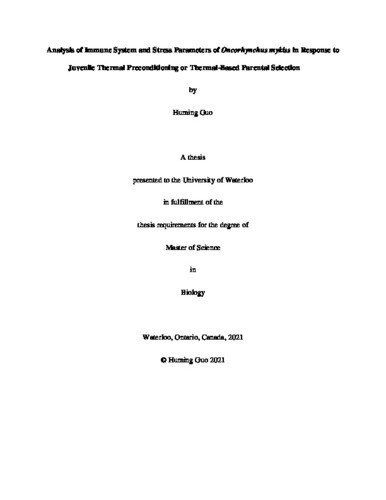 Higher water temperatures and pathogens are both significant factors that negatively affect the welfare of teleost fish. In aquaculture, compared to natural populations, these problems are especially exacerbated, as the animals have relatively limited mobility, and the higher density promotes faster spread of infectious diseases. Because of the potential harm these stressors can inflict, methods that can limit the damage of these stressors are particularly valuable. Two of the methods that have been explored as ways to improve the thermotolerance of aquacultured teleosts are juvenile-stage thermal preconditioning and thermotolerance-based parental selection. These methods have thus far demonstrated potentially effective improvements in the thermotolerance of animals, yet their potential effects on the immune system have not been explored, even though the heat-shock response and immune response are interconnected. In the first experiment, juvenile-stage thermal preconditioned rainbow trout (Oncorhynchus mykiss) were subject to a secondary thermal challenge in which animals were collected and sampled at the time of lost equilibrium. The effects of preconditioning were assessed on spleen and gill transcript profiles by quantifying IL-1β, IL-6, TNF-α, IFN-1, β2m, MH class I, HSP70, and HSC70 transcripts via qPCR, as well as assessment of the general stress response by measuring plasma cortisol levels. No changes in CTmax were observed between the preconditioned and control cohorts upon the second challenge. IL-1β and IL-6 transcripts were generally upregulated with increased temperature of the secondary thermal challenge, whereas IFN-1 transcripts were upregulated in the spleen, but downregulated in the gills, along with MH class I. The juvenile thermal preconditioning produced a series of changes in transcript levels for IL-1β, TNF-α, IFN-1, and HSP70, but the dynamics of these differences were inconsistent. Otherwise, plasma cortisol levels were lower in the pre-conditioned animals. In the second experiment, rainbow trout offspring of crosses raised from thermally selected parents were co-stimulated with a thermal and pathogenic challenge. Animals held at different temperatures were injected with an inactivated Vibrio anguillarum vaccine, and spleen tissue was sampled at 6-, 24-, and 96-hours post-injection. Relative transcript analysis of splenic IL-1β, IFN-γ, tapasin, and IL-10 was conducted with qPCR. All four transcripts were upregulated in response to the vaccine at 6- and 24-hours post-injection, and IL-10 was upregulated at 96-hours post-injection. The vaccinated cohorts held at a higher temperature presented evidence of an accelerated regulation profile compared to the vaccinated cohort held at a lower control temperature. The thermal selection of parents had a few significant changes across the assessed transcripts, but no consistent trends between transcripts. In general, these two methods were able to induce significant changes in immune transcript expression at higher temperatures both with and without immune stimulation. However, the biological significance of these changes will require further analysis to understand. If these thermotolerance-based methods can confer additional protection to the immune response, the revelation will be relevant to a global aquaculture industry that is constantly struggling with environmental and pathogenic pressures.