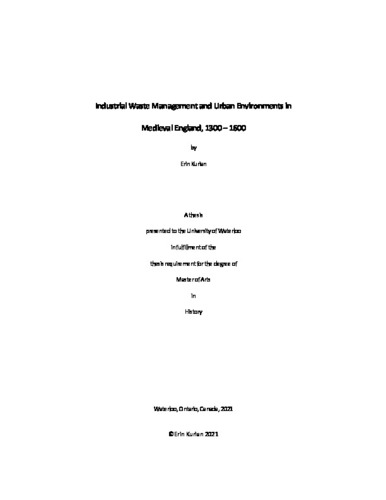 This paper demonstrates how key industries impacted urban environments in late medieval England from 1300-1600CE through an examination of city laws, ordinances, and rulings. It focuses on the municipalities of Bristol, Coventry, Leicester, London, Northampton, and York, all of which had a considerable urban population in this time and sufficient primary sources to conduct this study. This paper contributes to the historiography by proposing a middle ground between previous economic and public health histories on urban industries. Though English municipalities understood and acted to mitigate the impact of industrial contaminants and resource depletion on people and urban spaces, they often did not have the ability to do so. Authorities pursued trades which produced the most waste and tried to exercise regulatory controls over how and where tradesmen operated, how artisans could dispose of waste, who could buy industrial by-products, and where a trade took place. A consideration of butchery, fishers and fishmongers, tanners and leather workers, and brewers reveals a struggle between artisans and authorities and artisans and themselves in pursuing a hospitable environment. Artisans and authorities had both societal and commercial and societal interests. Artisans also had their reputation to uphold as the informal market threatened their business. Despite a strong pull towards clean spaces, artisans often created waste in pursuit of profit, easier working conditions, and little ability to dispose of necessary by-products in any other way. These industries are inherently resource intensive and wasteful and their position in cities multiplied these unwanted consequences of industry.