Graveyard of Republics: An Analysis of Torture in Counterinsurgency 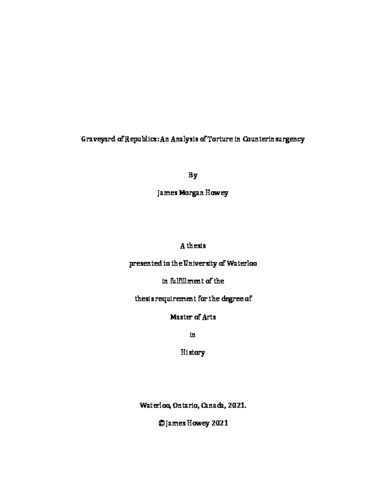 Counterinsurgency relies on the dual instruments of propaganda and coercion. If well balanced, these instruments may convince the civilian populace that the rebels cannot win; furthermore, the agenda of counterinsurgents seems to be morally superior to that of the rebels. To attain this balance, counterinsurgents must have a steady flow of intelligence. This is a key to victory, but intelligence gathering is a complex and time-consuming process. In times of great pressure, counterinsurgents tend to fall back on brutality, including torture, to compensate for a lack of information. Although torture provides a great volume of information, the cost of its acquisition is enormous: torture cripples pacification efforts, as it alienates the civilian populace and boosts insurgency. Furthermore, the credibility of information gained via torture is uncertain. The French campaign in Algeria and the American Global War on Terror were lost in part because security agencies resorted to torture in order to gain vital intelligence. The poison pill of torture is inimical to rational counterinsurgency operations.