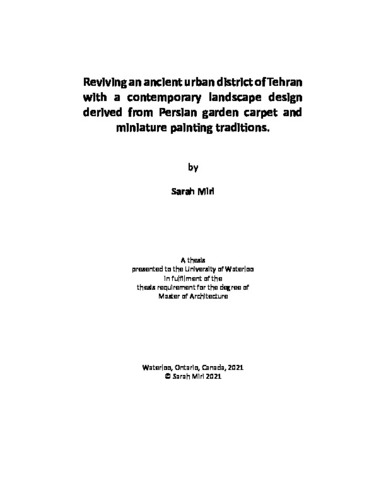 This comprehensive urban landscape design proposes to revive one of the oldest neighborhoods of Tehran, called Borazjan, located in the historical district of Oudlajan. In recent decades, the ancient urban fabric of Tehran has been altered significantly due to the new policies, economic alterations, and modern urban planning procedures. Likewise, Borazjan Alleyway has lost its former glory. Due to a failed square construction project in Borazjan, many valuable historical buildings were ruined and abandoned. But many outstanding ornamental elements remain on the walls around the site. Since the 1970s, several revitalization plans were proposed, and most of them failed because they sought to change the existing situation by refusing culture and history and destroying the old to build up the new modern projects that contrast with the rest of the traditional fabric. This issue is addressed in this design. A meaningful link between heritage and its social environment has been established by creating concrete ways for inhabitants to feel that culture can thrive where they live and portray hope. Renewed references to Persian history, culture, and art become tools of knowledge to revive Borazjan. The Persian Garden, which is more of a community garden, is used as the most fundamental characteristic of a gathering place to turn the unused open space of Borazjan into a safe synergetic environment. The design portrays the proposal social programs and landscape design inspired by the Persian garden tradition, its relation to the Persian carpet, and its depiction in Persian miniature paintings. The design proposal updates the contemporary Borazjan, thereby merging past and present activities and socio-economic demands. As well as the social realm, the design focuses on the microclimate effects of the proposed landscape that include temperature, humidity, and fragrance, to create a pleasing environment responsive to Tehran's climate. The proposal intensifies historical awareness by preserving and exhibiting the ancient walls and ornamental elements around the site within a contemporary landscape.