A Vicious Cycle: An Examination of How the Feedback Loop Between Coup-proofing and Regime Insecurity Helped Facilitate the Rise of Pro-Government Militias in the Syrian Conflict 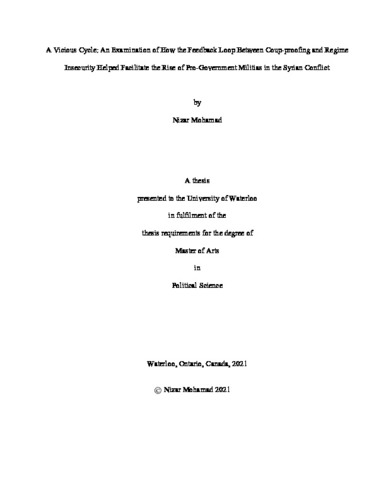 This thesis explores the emergence of pro-government militias (PGMs) within the context of the post-2011 intrastate conflict in Syria. It investigates the factors that contributed to the breakdown of Syria’s armed forces during their counterinsurgency (COIN) campaign. By inquiring into the mechanisms that drove the unravelling of Syria’s coercive machinery, this thesis sheds light on why the regime of Syrian president Bashar al-Assad specifically resorted to leveraging irregular forces to which security functions conventionally reserved for the state were outsourced. As such, this thesis asks the following research question: What are the drivers underpinning the employment of PGMs in the post-2011 Syrian conflict? This thesis progresses in four main parts. First, it introduces the purpose, relevance, and methodology of the research, followed by a literature review that engages with the scholarly work surrounding the use of PGMs in COIN settings. Second, it highlights how Syrian President Bashar al-Assad coup-proofed his coercive forces, prioritizing coup risk mitigation over military effectiveness. The subordination of their coercive institutions in accordance with strategies deliberately intended to divide them resulted in a dysfunctional security sector that third, was incapable of cohesively performing combatively and withstanding the advances of insurgents once the uprising had militarized. Fourth, it demonstrates that as the Syrian regime became more insecure, it outsourced greater functions to PGMs in order to compensate for the depletion of the state’s official armed and security forces. This thesis ultimately argues that a vicious cycle between coup-proofing and regime insecurity created a feedback loop that motivated the Syrian regime to resort to incorporating PGMs into its COIN effort.

Nizar Mohamad (2021). A Vicious Cycle: An Examination of How the Feedback Loop Between Coup-proofing and Regime Insecurity Helped Facilitate the Rise of Pro-Government Militias in the Syrian Conflict. UWSpace. http://hdl.handle.net/10012/17404