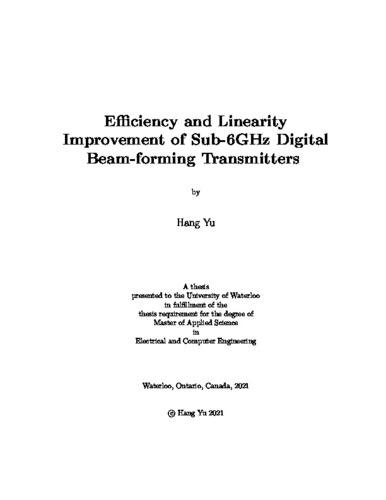 The fifth generation (5G) cellular network promises to bring higher data capacity, faster transmission speed, and lower latency. 5G employs massive multiple-input multiple-output (mMIMO) architecture which enables many more transceivers and antennas than what is used in 4G allowing higher capacity and beam-forming capability. Since many more transceivers and antennas are being deployed, the RF front-ends need to be more compact, cheaper and lighter to fit a similar physical footprint of 4G LTE base-station cell towers. One of the more profound changes made on RF hardware to reduce size and weight is the removal of isolators/circulators between power amplifiers (PA) and antennas, which brings the issue of isolation between PA output and antenna input. PA performances such as linearity, output power and efficiency relies heavily on the impedance which the drain of transistor sees. With removal of isolators at the PA load, limited isolation between PA and antenna will cause significant loss in PA performance due to active antenna impedance varying significantly during MIMO operations. This work presents a two-by-two array of class AB PAs connected to an antenna array with re-configurable spacing to study the effects of antenna cross-talk on the linearizability and efficiency of 5G sub-6GHz wide-band mMIMO transmitters. The antenna array is formed of modular dual-polarized patch antenna and the array inter-element spacing can be reconfigured to be 0.6λ, 0.7λ and 0.8λ to study the effect of antenna cross-talk during MIMO operation. The class AB PA is designed using gallium nitrite (GaN) transistors. A custom built front-end frame is designed to accommodate both PA arrays and antenna arrays in a compact fashion while enabling the front-end transmitter to extend from two-by-two up but not limited to six-by-six array configuration. The ability of single-input single-output (SISO) and dual-input single-output (DISO) digital predistortion (DPD) techniques to linearize the PA arrays is also assessed under 5G-candidate 100 MHz orthogonal frequency-division multiplexing (OFDM) test signals. The measurement results reveal that antenna load mismatch is the dominating factor for performance degradation in MIMO systems, since it impacts output power, efficiency, and linearity. While antenna cross-talk mainly impacts linearity, degrading ACPR under SISO DPD, but DISO DPD can successfully linearized the transmitter front-end in all scenarios.