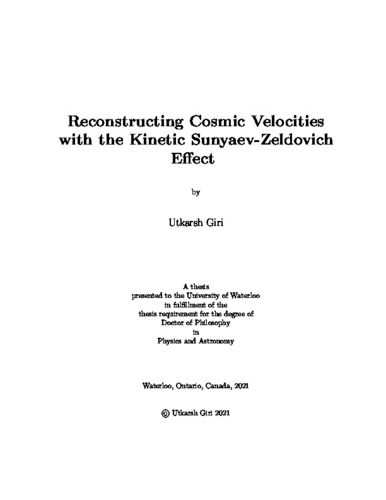 Over the last few decades, Physical Cosmology has come a long way from a primitive and data-deprived field of research with several speculative theories of origin, evolution, and composition of the Universe to a mature, data-driven field of research with a very well-established theoretical foundation. The Standard Model of Cosmology, the 6-parameter $\Lambda$CDM model, has been immensely successful in describing most (but not all) of what we see around us in the observable Universe. Tested against various independent cosmological probes like the Cosmic Microwave Background (CMB), Large-Scale Structure (LSS), Lyman-alpha forest, supernovae datasets, etc, the model has proven to be pretty concordant. However, there still remain several tantalizing open questions about our universe which have kept cosmologists occupied. Our progress in answering these questions is usually a matter of gleaning more and more information about our universe. This is done either by finding new probes, acquiring more data for existing probes, or by improving statistical methodologies employed to existing probes and datasets. The first part of this thesis develops and explores the use of the kinetic Sunyaev-Zeldovich (kSZ) effect as a cosmological probe. After giving a brief overview of the field in an introductory chapter, a theoretical framework for the study of the kSZ effect is laid out in chapter 2. We propose an optimal bispectrum estimator that combines CMB maps with galaxy surveys and show its equivalence to existing statistics. We explore the information content of the estimator, generalize it to incorporate issues arising from redshift uncertainties in photometric surveys and redshift space distortions, and produce forecasts for upcoming CMB experiments and galaxy surveys. Chapter 3 explores kSZ velocity reconstruction --- a quadratic estimator for mapping the largest-scale cosmological modes of the Universe. We implement kSZ velocity reconstruction in an N-body simulation pipeline and explore its properties. We find that the reconstruction noise can be larger than the analytic prediction which is usually assumed. We revisit the analytic prediction and find additional noise terms which explain the discrepancy. The new terms are obtained from a six-point halo model calculation and are analogous to the $N^{(1)}$ and $N^{(3/2)}$ biases in CMB lensing. We implement an MCMC pipeline which estimates $f_{NL}$ from N-body kSZ simulations and show that it recovers unbiased estimates of $f_{NL}$, with statistical errors consistent with a Fisher matrix forecast. Overall, these results confirm that kSZ velocity reconstruction will be a powerful probe of cosmology in the near future, but new terms should be included in the noise power spectrum. The second part of the thesis presents my contribution to the CHIME/FRB collaboration where we are searching for Fast Radio Bursts (FRB). FRBs are bright, millisecond pulses of extra-galactic origin which were first seen in 2007 in a radio survey, with another handful of them seen in the ensuing decade. A tracer of large-scale structure, FRBs offer a new window into the Universe and are sensitive to many astrophysically relevant quantities. The CHIME/FRB experiment which was commissioned in 2018, is currently the leading experiment cataloging and studying these FRBs. I developed a Markov Chain Monte Carlo pipeline that fits models of varying complexity to the FRB events observed by CHIME.