Universe Beyond Inflation and ΛCDM 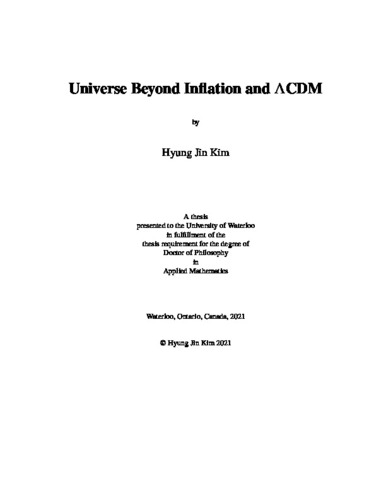 The current paradigm of universe, $\Lambda CDM$ model with an early phase of inflation, has been quite successful in describing our universe in a simple manner, yet matching well with the observational evidence. This model is a parameterization of the Big Bang theory with the universe composed of the three major components: the Cold Dark Matter (CDM) and the cosmological constant $\Lambda$ accounting for the dark energy, and ordinary radiation and matter (relativistic and non-relativistic particles from standard model). However, there are some questions and puzzles yet to be solved or addressed. In the aspect of the early universe, the cosmic inflation has been successful in resolving problems such as the horizon problem, flatness problem, yet it fails to answer some other remaining puzzles such as the singularity problem and fitting in standard theory of particle physics. In the first part, I explain two different approaches to tackle these issues. First, I will show how singularity can be avoided in a bouncing universe realized through a Cuscuton modification of gravity, without any instabilities. Second, I will demonstrate how the effective field theory of inflation can be extended to include $k^6$ terms in the dispersion relations. I will also show that there exists regions of parameter space that are allowed by the observational evidence. In the context of the late universe, one of the challenges $\Lambda CDM$ model faces is the detection of, or lack thereof, dark matter. Without the existence of cold dark matter, Einstein's theory of gravity fails to explain some of the observed gravitational effects in large scale structures such as rotation curves for galaxies. Furthermore, the measured upper bound to the cosmological constant is much smaller than the theoretical value of zero-point energy suggested by quantum field theory. To resolve such questions, other theories and models of universe such as theories of modified gravity and other dark energy models have been proposed. In the second part, a model-independent approach to constrain cosmological parameters and different expansion histories will be demonstrated. Interestingly, with the precision of current data it seems that the observation favor $\Lambda CDM$ model.