The "Manhattanization" of Midtown Toronto: A Case Study on the Effects on Livability in an Intensifying Neighbourhood 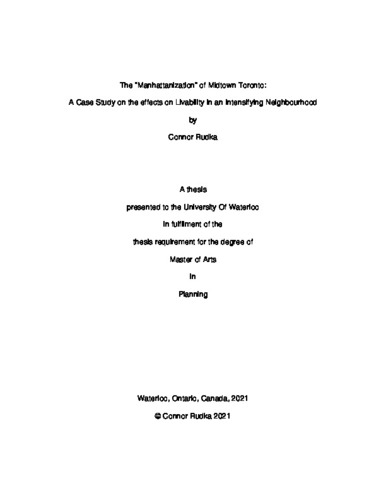 In order to become more sustainable, cities around the world have increasingly adopted smart growth policies to combat urban sprawl and produce more sustainable environments. These principles, when properly implemented, are meant to facilitate a modal shift from automobile use to public transit and active transportation, provide a diverse range of housing forms, mix land uses so individuals can live, work and play in one neighbourhood, and provide a greater sense of livability. The Midtown neighbourhood (centered around Yonge Street and Eglinton Avenue) is already the most densely populated Urban Growth Center in the Greater Golden Horseshoe region. With the introduction of new transit infrastructure, there has been a frenzy of new developments and development proposals that will add tens of thousands of new residents to the area. Using Midtown Toronto as a case study, this research examines how the pursuit of ‘smart growth; and the implementation of its key principles has affected resident’s perceived sense of livability in Midtown Toronto. This research employs a mixed method approach, including questionnaires, policy and report review and development submission package analysis, to assess development in Midtown Toronto and the effect on residents’ perceived livability. This study used a convenience-based sampling method and included responses from twenty-three residents in the neighbourhood. The findings of this study indicate that development proposals could add almost 40,000 new residents to the Midtown Toronto neighbourhood in the near future and that the sectors involved in providing the community services and facilities necessary to support this growth are severely strained and threaten to become more so as the pace of growth continues. Further, many residents expressed that the level of development within the Midtown Toronto neighbourhood is negatively impacting their livability. These findings suggest that while smart growth principles are meant to produce an enhanced sense of livability for residents, without proper implementation, the opposite may occur. The findings from this study of Midtown Toronto demonstrate that smart growth must be implemented in a well-planned, stepped manner in order for changes to be absorbed into a neighbourhood and in order to allow for the corresponding growth in infrastructure and amenities to ensure residents’ livability is not negatively impacted.

Connor Rudka (2021). The "Manhattanization" of Midtown Toronto: A Case Study on the Effects on Livability in an Intensifying Neighbourhood. UWSpace. http://hdl.handle.net/10012/17363