A guide to F-automatic sets 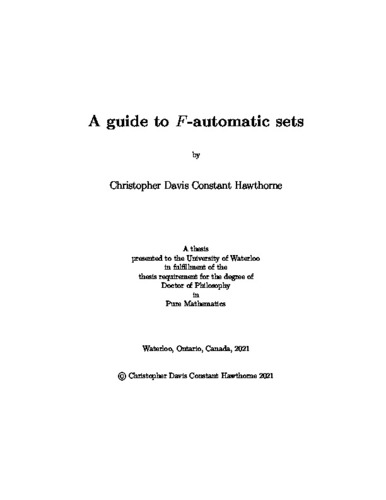 A self-contained introduction to the theory of F-automatic sets is given. Building on [Bell, Moosa, F-sets and finite automata, Journal de théorie des nombres de Bordeaux, 2019], contributions are made to both the foundations of this theory and to questions of a model-theoretic nature. Suppose Γ is an abelian group and F : Γ → Γ is an injective endomorphism. If (Γ, F) admits a "spanning set" then the notion of an F-automatic set can be defined. It is shown that this notion is independent of the spanning set chosen. A characterization of the existence of a spanning set is given in terms of certain functions on Γ, called "height functions". It is shown that if Γ is finitely generated then (Γ, F) admits a spanning set if and only if no eigenvalue of the matrix of F lies in the complex unit disk. A notion of sparsity among F-automatic sets, called F-sparsity, is studied. Outstanding questions from [Bell, Moosa, F-sets and finite automata, Journal de théorie des nombres de Bordeaux, 2019] are resolved, including independence from the spanning set chosen and closure under set summation. In addition, it is shown that sparsity can be characterized in terms of another natural class of functions introduced here, called "length functions". Model-theoretic tameness properties of F-automatic sets are studied. In the case where Γ is finitely generated, a combinatorial description is given of the stable F-sparse sets in terms of the F-sets introduced in [Moosa, Scanlon, F-structures and integral points on semiabelian varieties over finite fields, American Journal of Mathematics, 2004]. When Γ = ℤ, this description is extended to a characterization of the stable F-automatic sets. It is shown that if A ⊆ Γ is F-sparse then (Γ, +, A) is NIP. Automatic methods are used to show that the following structures have NIP theories: (ℤ, +, d^ℕ, ×↾d^ℕ) for d ≥ 2, (𝔽_p[t], +, t^ℕ, ×↾t^ℕ) for prime p ≥ 9, and (ℤ, +, <, d^ℕ) for d ≥ 2. (Here d^ℕ = {1, d, d^2, ...}, and likewise with t^ℕ.)