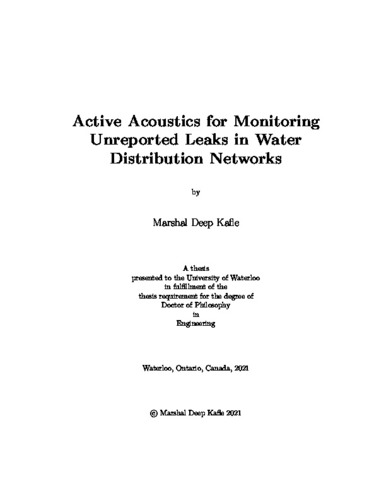 Water distribution networks (WDNs) are critical infrastructure elements conveying water through thousands of kilometers of pipes. Pipes - one of the most critical elements in such systems - are subjected to various structural and environmental degradation mechanisms, eventually leading to leaks and breaks. Timely detection and localization of such leaks and bursts is crucial to managing the loss of this valuable resource, maintaining hydraulic capacity, and mitigating serious health risks which can potentially arise from such events. Much of the literature on leak detection has focused on passive methods; recording and analyzing acoustic signatures produced by leak(s) from passive piezo acoustic or pressure devices. Passive acoustic methods have received disproportionate attention both in terms of research as well as practical implementation for leak (or, bursts) detection and localization. Despite their popularity, passive methods have shown not to be reliable in detecting and localizing small leaks in full-scale systems, primarily due to acoustic signal attenuation and poor signal-to-noise ratios, especially in plastic materials. In this dissertation, an active method is explored, which uses an acoustic source to generate acoustic signatures inside a pipe network. A combination of active source and hydrophone receivers is demonstrated in this thesis as a viable method for monitoring leaks in water distribution pipes. The dissertation presents experimental results from two layouts of pipes, one a simple straight section and another a more complex network with tees and bends, with an acoustic source at one end, and hydrophones at strategic locations along the pipe. For leak detection, the measured reflected and transmitted energy using hydrophone receivers is used to determine the presence of a leak. To this effect, new leak indicators such as power reflection and transmission coefficients, power spectral density, reflected spectral density, and transmission loss are developed. Experimental results show that the method developed in this thesis can detect leaks robustly and has significant potential for use in pressurized water distribution systems. This thesis also presents a new framework for active method-based localization. Starting with a simple straight section for a proof of concept study and moving to lab-based WDNs, several methods are explored that simultaneously detect and locate a leak. The primary difficulty in detecting and estimating the location of a leak is overcome through a statistical treatment of time delays associated with multiple acoustic paths in a reverberant environment and estimated using two approaches: (i) classical signal decomposition technique (Prony's / matrix pencil method (MPM)) and (ii) a clustering pre-processing approach called mean-shift clustering. The former works on the cross-correlation of acoustic data recorded at two locations, while the latter operates on acoustic sensor data from a single location. Both methods are tested and validated using experimental data obtained from a laboratory testbed and are found to detect and localize leaks in plastic pipes effectively. Finally, time delay estimates obtained from Prony's / MPM are used in conjunction with the multilateration (MLAT) technique and extended Kalman filter (EKF) for localization in more complex WDNs. This study shows that the proposed active technique can detect and reliably localize leaks and has the potential to be applied to complex field-scale WDNs.