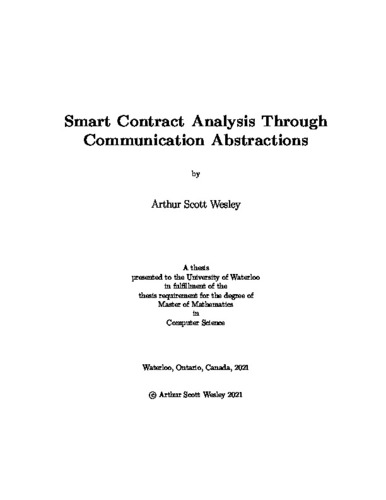 Smart contracts are programs that manage interactions between many users. Recently, Solidity smart contract have become a popular way to enforce financial agreements between untrusting users. However, such agreements do not eliminate trust, but rather redirects trust into the correctness of the smart contract. This means that each user must verify that a smart contract behaves correctly, regardless of how other users interact with it. Verifying a smart contract relative to all possible users is intractable due to state explosion. This thesis studies how local symmetry can be used to analyze smart contracts from a few representative users. This thesis builds on the novel notion of participation, that gives explicit semantics to user interactions. From participation, a topology is obtained for how users interact during each transaction of a smart contract. Local symmetry analysis shows that most users are interchangeable within a topology, and therefore, most users are locally symmetric. This motivates local bundle abstractions that reduce contracts with arbitrarily many users to sequential programs with a few representative users. It is shown that local bundle abstractions can be used to ameliorate state explosion in smart contract verification, and to accelerate counterexample search in bounded analysis (e.g., fuzzing and bounded model checking). We implement local bundle abstraction in SmartACE, and show order-of-magnitude improvements in time when compared to a state-of-the-art smart contract verification tool.