Counterculture Plan for the Creative City: A Critique of Patterns of Flexibility and Fixity in Toronto's Cultural Renaissance 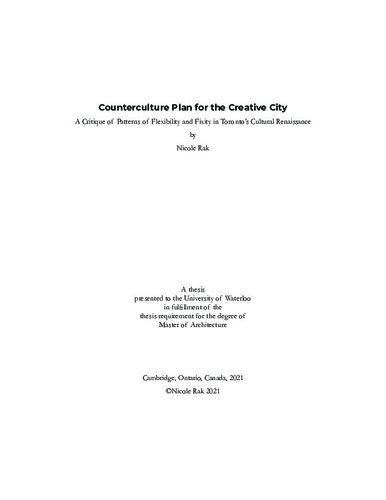 Between the years 2000 and 2010, the City of Toronto experienced an unprecedented spike in cultural construction. This building boom, ushered in by Toronto’s “Culture Plan for the Creative City” and dubbed “Toronto’s Cultural Renaissance,” has had a lasting impact on the city’s identity, shaping many of its most visible cultural landmarks. In this thesis, I look to Creative City theory and the architecture it has produced in Toronto as representative of forms of flexible accumulation which have been under development since the 1970s. Just as the free plan of the factory floor was representative of the patterns of Fordism, spectacular galleries and museums today represent new forms of capital accumulation. While finance, production, and workers have all become increasingly mobile, I argue that Toronto’s “creative” architectures have all become increasingly inflexible. While architectural theorist Pier Vittorio Aureli has positioned flexible space as the edifice of expanding immaterial labour markets, I propose an alternate theory; spaces of immaterial and flexible labour exploitation take place in increasingly fixed and inflexible architectures. To make this argument, I draw on the work of geographer David Harvey, who points to the fact that flexibility is often contrarily reliant on fixity. Between the fixed architectures of the Creative City and the increasingly flexible landscapes of accumulation they occupy, there emerges a destructive relationship to culture and context; flexible geographies + fixed architectures = a tabula rasa approach to history. Any cultural policy or construction that aims to foster stable cultural growth, founded in community as opposed to consumption, must actively resist these patterns. Only through the reallocation of flexible space to the scale of architecture, and by extension the provision of creative agency to the scale of the resident, can cities plan for anti-capitalist futures and cultures deeply rooted in context, community, and place.

Nicole Rak (2021). Counterculture Plan for the Creative City: A Critique of Patterns of Flexibility and Fixity in Toronto's Cultural Renaissance. UWSpace. http://hdl.handle.net/10012/17346