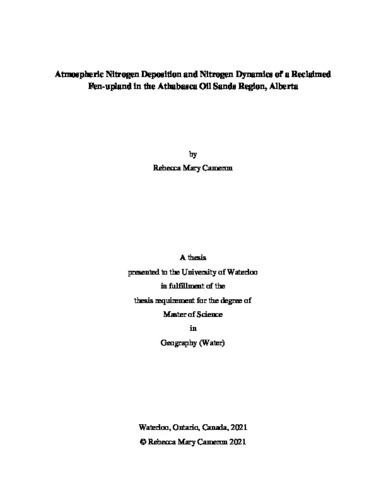 Surface mining in the Athabasca Oil Sands Region (AOSR) has resulted in the alteration of over 895 km2 of wetland and forest ecosystems in the Western Boreal Plain (WBP) of northeastern Alberta. After surface mining ceases, the Alberta Government requires all disturbed land be reclaimed to an equivalent pre-mined land capability that consists of native boreal plant and wildlife species. The Nikanotee Fen Watershed is a reclaimed fen peatland – forest upland system constructed as a pilot attempt to reclaim the post-mined landscape back to a self-sustaining, carbon accumulating and biodiverse fen-upland ecosystem. During reclamation, ongoing mining operations continuously emit nitrogen (N) emissions that subsequently deposit onto the surrounding environment. This N deposition is a biogeochemical and ecological disturbance to the reclaimed system that may impact the N-status of the typically low N environment, which could threaten reclamation objectives. Quantifying N deposition and assessing the N-status of the reclaimed system will further our understanding of the impacts of N deposition on young post- mined landscapes. This study assesses N deposition both from a large- and small-scale perspective in the AOSR. The first objective quantifies N deposition loads to the reclaimed site (situated directly within the industrial centre) and three reference sites located between 10-65 km south from the industrial centre, to determine whether the reclaimed site receives greatest N deposition loads due to its industrial location (large-scale perspective). The following objectives focus only on the constructed fen-upland to analyze N availability and N dynamics on the reclaimed landscape, and determine the N-status of the fen-upland and assess the potential implications of N deposition on the development of the system (small-scale perspective). Nitrogen deposition was collected using a network of passive atmospheric deposition collectors across all study sites and a variety of environmental samples were collected specifically at the reclaimed fen-upland to assess N availability, dynamics, and status of the soil-water- vegetation continuum of both reclaimed landscape units. Results indicate that N deposition loads of nitrate (NO3-N), ammonium (NH4-N) and total inorganic N (TIN) were greatest at the reclaimed site, decreasing with distance southwards from the industrial centre, suggesting that the reclaimed site is the most susceptible to the impacts of N deposition (particularly ecosystem N enrichment). Although the reclaimed site is situated in a high N deposition zone in the AOSR, N deposition is not currently increasing N availability or dynamics of either landscape unit. Ecosystem indicators within the soil-water-vegetation continuum suggest that the fen-upland is a low N environment. Findings from this study improve our understanding of the recovery of N nutrient pools ~7 years post-reclamation. Furthermore, findings from this study provide a foundation for understanding the N-status of a reclaimed landscape receiving greater-than-background N deposition loads and what this may mean for the development of the system.