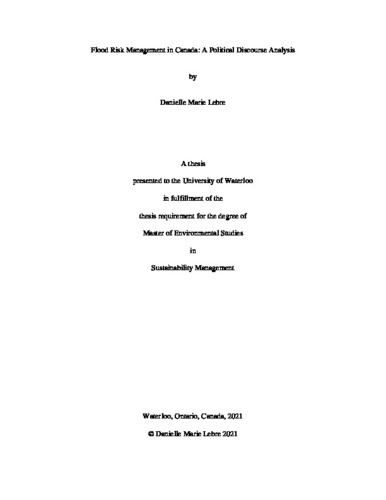 Floods are Canada’s most frequent and expensive natural catastrophe; they are associated with the largest losses of any climate-related disaster in Canada (Nastev & Todorov, 2013). As the impacts of climate change take effect and urban exposure to flood-prone regions increases, the costs associated with flooding are projected to increase to a level that is no longer socially or economically feasible (Sandink, 2009). As a result, policymakers in Canada are facing mounting pressure to better manage flood risk. Flood Risk Management (FRM) is an approach that is widely cited in flood policy literature as a robust framework to mitigate the risks associated with flooding. FRM encompasses several key elements that define it as an effective flood policy directive and asserts an overall shift to risk-based management practices (Henstra & Thistlethwaite, 2017a). Despite widespread support within flood policy research, the uptake of FRM in Canada remains slow and there has been little research done to determine how political leaders understand these measures and their objectives. This research aims to determine how flooding is being discussed as a policy issue within the Canadian political sphere, through examining how Canadian political discourse frames flooding as a policy problem, and the role of FRM in political discourse in practice. A content analysis on flood discourse from the Hansard Index of the Canadian House of Commons examined connections between political discourse on floods and FRM framing, through determining the presence or absence of variables that indicate effective FRM dialogue. A codebook was developed based on key indicators from flood policy literature to explore this relation, and contained the following categories, (1) Flood Identification, (2) Party Speaking on Flooding, (3) Problem Framing, (4) Climate Change Framing (5) Flood Risk Management Focus, and (6) Stakeholder Identification. A statistical analysis was then performed to determine the relation between the ideology of Canadian political parties and FRM frames. The results indicate that despite the recent shifts in discourse that is proactive to FRM, there remains several policy considerations that need to be met to effectively implement sustainable flood management policy, including stakeholder diversification, consideration for vulnerable populations, and a need for more political discourse frames which are consistent with FRM literature. Further, flood discourse is largely event-based, rather than risk based. indicating that discussions surrounding flooding are initiated by the occurrence of a flood event. The results also show that major political events are drivers of a change in discourse, and that political representation and ideology influences flood discourse. This study contributes to an improved understanding of FRM in practice in Canada, and the elements of FRM that are prevalent within political discourse and those that remain priorities to implement a robust flood management framework in Canada. This research could be expanded upon to evaluate management practices for other climate-related phenomenon, as well as determine FRM uptake at other levels of government in Canada and internationally.