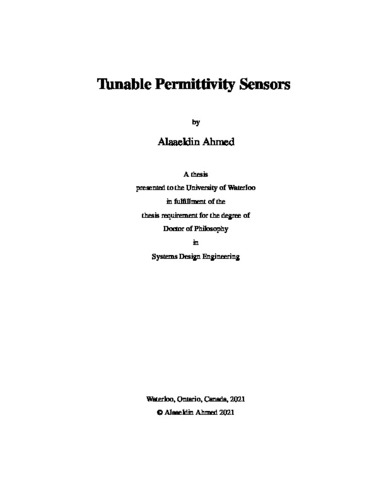 This thesis presents a novel electric permittivity sensor based on Bleustein- Gulyaev (BG) waves; waves that propagate along the surface of shear-poled piezoelectric materials. BG waves couple electromagnetic and acoustic waves, thereby reducing the speed of electromagnetic propagation to near acoustic speeds. Exploiting this property allows the development of permittivity sensors that feature several orders of magnitude reduction in size and operating frequency. This releases the limitations of RF complexity while reducing cost considerably. It also makes the sensor attractive for biological applications, as opposed to RF sensors that are limited by the water relaxation phenomenon at frequencies beyond 4 GHz. To date, sensors that used BG waves were limited to sensing mechanical properties, such as viscosity and density, which exploited the acoustic component of the wave only. To our best knowledge, this is the first attempt to probe and sense an electrical property acoustically using BG-waves. Towards that end, the nonlinear partial differential equations governing an electromechanical BG wave resonator are formulated. The permittivity of the medium-under-test was found to influence the sensor eigenvalues, enabling the implementation of a frequency-shift permittivity sensor. We also find that the sensor sensitivity is enhanced by increasing bias voltage to drive the sensor into the nonlinear regime, but this is limited by electrical breakdown. Sensor prototypes were fabricated on PZT4 and LiNbO3 shear-poled substrates. A novel method to characterize shear-horizontal surface acoustic waves, SHSAW, using a 1D Laser Doppler Vibrometer was developed to test the sensors. The method was also shown to be able to estimate the in-plane displacement field decay rate into the substrate. This technique provides researchers with a quick and effective method for the characterization of SH-SAW. The resonator model was validated using this experimental method. A Vector Network Analyzer was employed to observe the shift in the fundamental natural frequency of the fabricated permittivity sensors in the presence of various media-under-test. Measurements show deterministic and repeatable frequency shifts in the natural frequency in the presence of ethanol and deionized water compared to that of the bare surface, thereby demonstrating the permittivity sensor.