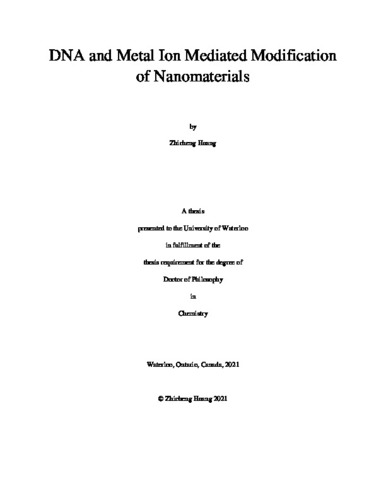 DNA-modified nanomaterials have been applied in diverse areas such as biosensing, catalysis, drug delivery, and biomedical diagnostics. Metal ion mediated DNA conjugation is an important strategy for the construction of DNA/nanomaterials. The interactions between metal ions and DNA phosphate backbones were found critical for DNA adsorption. Most previously reported metal ion mediated DNA/nanomaterial conjugates focused on the role of metal ions for charge screening but ignored the potential formation of DNA/metal complexes, especially for multivalent ions. Since the report of DNA/Fe2+ coordination polymers (CPs), Fe2+ has become attractive in the modification of nanomaterials. One popular nanomaterial is gold nanoparticle (AuNP) which exhibits unique localized surface plasma resonance (LSPR) and enzyme-mimic catalytic activities. The primary focus of this thesis has two main parts: (a) the fundamental understandings of metal ion mediated adsorption of DNA oligonucleotides on 2D nanosheets such as graphene oxide (GO) and Ti2C MXene; (b) the exploration of Fe2+ containing complexes and their applications in designing AuNP-based colorimetric sensors.