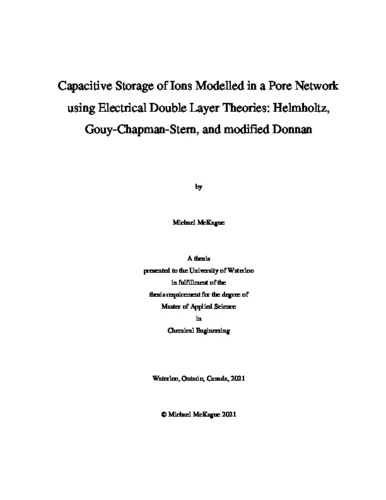 Capacitive Deionization (CDI) is an electro-driven water desalination technology that has been researched extensively over the last two decades. A CDI cell consists of a pair of charged porous electrodes separated by a dielectric spacer. The electrodes are typically a pair of porous electrodes where ions are stored within the electrical double layers (EDLs) of micropores. Accurate modelling of capacitive electrodes depends heavily on EDL models. There have been many attempts at modelling CDI but most studies treat the electrode as a continuum with effective properties. Pore structure has been shown to have a significant effect on CDI cell performance and a Pore Network Model (PNM) is one such tool for modeling the effects of pore structure. To the best of the author's knowledge, there is no prior PNM of CDI or any PNM, in general, that incorporates EDL theory at all. Therefore, this work is the first attempt at applying electrical double layer models to a pore network for simulating the storage of ions into micropores. The most common EDL models used in studying CDI are: Helmholtz, Gouy-Chapman-Stern, and modified Donnan. In this work, each of these EDL theories are applied to a network of pores for modelling the storage of ions into micropores. For computational efficiency, only the macropore space was resolved in the pore network and neighbouring micropore regions where ions are electrosorbed was treated with a sub-model. A test 2D network of 294 pores consisting of anode, spacer, and cathode subregions was used to demonstrate the use of developed numerical method equations for modelling charging in a stop flow CDI cell. Other simplifying assumptions made were electroneutrality in the macropores, equal anion and cation diffusivities, and monovalent salt solution. These assumptions reduced our problem to a transient fickian diffusion problem coupled with an ionic transport algorithm. The open-source pore network modelling package called OpenPNM was used for pore network modelling and solving our coupled transport equations. Results from OpenPNM were validated by comparing to COMSOL and the relative error for concentration and potential was always less than 10% and 15% respectively at all times of the simulation. Charging dynamics of the pore network was demonstrated along with a demonstration on how to obtain discharge curves during the flow stage. Lastly, a pore network model was applied to a stop flow CDI cell found in literature. A 3D network of pores was developed and calibrated to have the same pore size distribution, porosity, and permeability as the electrode-spacer assembly in literature. Discharge curves from the calibrated pore network model and literature were found to have good agreement, but it was difficult to model correctly due to likely turbulence in the outlet and the conductivity sensor being downstream of the outflow port. This is the beginning of using pore networks to model EDL based ion storage.