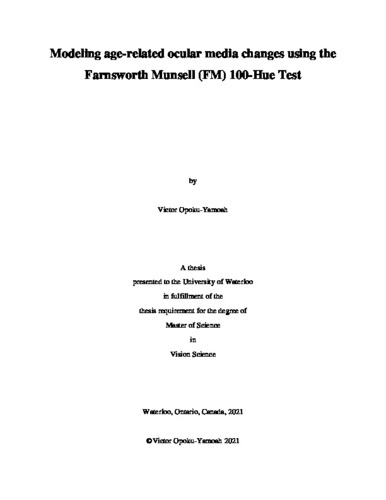 Introduction: Evaluation of chromatic discrimination can help diagnose and monitor diseases and disorders of the visual system; however, normal age-related changes can make diagnosing colour discrimination losses challenging. This problem holds especially for the Farnsworth Munsell 100 Hue test (FM100 Hue). Identifying specific contributions of areas of the visual system that influence the FM100 Hue performance could aid in establishing standardized interpretation of test results and help understand the mechanisms contributing to the age-related changes. Purpose: This study aimed to examine the theoretical changes in the FM100 Hue scores produced by age-related changes in the ocular media transmittances. These changes were examined with, and without, a von Kries type chromatic adaptation to determine the role of this adaptation process on age-related changes in hue discrimination. Materials and methods: We calculated the CIECAM02 chromaticity coordinates of the FM100 Hue caps for 32-year-old and 74-year-old as ideal observers. These values were then used to predict the ordering of the FM100 Hue caps. The chromaticity coordinates were based on the spectral distribution of Illuminant D65, the spectral reflectances of the individual caps, and the CIE 1931 2o standard observer colour matching functions. In calculating the values of the old observers, we modified the spectral distributions of the D65 light sources using Pokorny et al.’s and van de Kraats and van Norren’s model of media transmittance to account for the relative change in transmittance from a 32-year-old observer to a 74-year-old observer. We also accounted for the decrease in retinal illumination in the older observers due to pupil miosis and the decrease in ocular media luminous transmittance. The order of the caps was based on the minimum colour differences (ΔE) between nearby caps. The mean and standard deviation of the colour differences for each tray was calculated. The mean colour difference was also determined for the caps in the blue-yellow (BY) and red-green (RG) quadrants. Results: With complete and partial adaptation, the Total Error Score (TES) increased from 8 for the younger observer to12 for both older observer models of media transmittance. The ordering for the caps along the blue-yellow axis was unchanged from the younger observer. Without adaptation, the error score for the older observer model increased further. The increase was primarily for caps along the red-green axis for van de Kraats and van Norren’s model, whereas the increase for Pokorny et al.’s model was along both the red-green and blue-yellow axis. The mean colour differences across trays for the young observer model were marginally larger than the old observer models for complete and partial adaptation. When the caps were grouped in the RG and BY quadrants, the mean differences for the older observers were still lower than the young observer. Differences between the BY and RG error scores were also larger for the older observers. Without adaptation, the mean colour differences for the older observer models were uniformly lower than with complete or partial adaptation. Conclusion: The predicted effect of age-related changes in media transmittances on the ordering of the FM100 Hue test showed an increase in the TES, as expected. The increase, however, was primarily due to an increase in the RG partial error score, which disagrees with the psychophysical data showing a larger increase in the BY error score. This discrepancy suggests that age-related neural changes are also occurring, which is consistent with conclusions from other psychophysical studies. The two different models for age-related media changes produced similar changes in the FM100 error scores. Chromatic adaptation may compensate for age-related media changes.