Cause or Consequence? The Interrelationship Between Physical Activity and Fractures 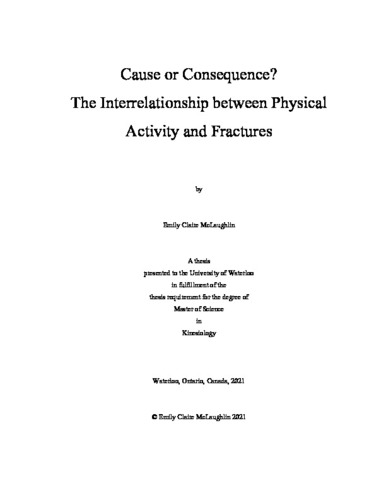 Our study characterized the physically active and non-active circumstances during which fractures occur and explored long-term effects on physical activity following one or more fractures of the hip or pelvis, spine, upper limb, or lower limb. 9423 community-dwelling women and men aged ≥ 25 years, participating in the Canadian Multicentre Osteoporosis Study (CaMos) were included. Medical and lifestyle history, including self-reported physical activity, was obtained by interview at baseline, year 5 and year 10. Spinal radiographs were taken in people ≥ 50 years of age. Details of incident fractures were recorded yearly using questionnaires, and fractures were confirmed by X-ray. 1533 fractures were reported and confirmed (13% hip, 4% pelvic, 12 % vertebral, and 71% other). Most fractures occurred in women aged ≥ 50 years with a BMD T-score ≤ -1.0 SD. Descriptive analyses revealed that 65% of fractures occurred due to falls during daily activities. Sporting injuries accounted for 6% of all fractures. Vertebral fractures often occurred without fall or injury or due to other circumstances including lifting, bending, or carrying. Repeated measures Analysis of Variance identified decreased physical activity participation between baseline, year 5, and year 10 (F (2,5503) =61.54, p<0.001). Decreased physical activity in people who reported an incident fracture compared with no fracture was only significant at year ten (F (2,5503) =7.24, p<0.01). In adjusted multivariable regression analyses, having a hip or pelvic fracture between year 1 and year 5 was significantly associated with decreased physical activity at five-year follow up (-1857.87 MET-mins/week; 95% CI [-2587.46, -1128.29]). Other fracture types or multiple fractures of any type occurring between years one to five, and years five to ten were not associated with physical activity at five or ten-year follow-up. Previous activity, age, body mass index, education, and number of comorbidities were significant correlates. To maintain physical activity in people at risk of fracture, interventions should emphasize falls prevention while re-training safe movement patterns during activities of daily life. Further research to understand the long-term implications of fracture on physical activity is needed.

Emily Claire McLaughlin (2021). Cause or Consequence? The Interrelationship Between Physical Activity and Fractures. UWSpace. http://hdl.handle.net/10012/17320