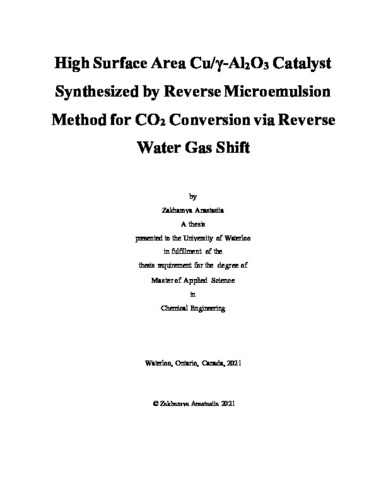 Nowadays, catalytic conversion of CO2 has gained great attention due to environmental issues caused by CO2 emissions around the world. CO2 can be considered as a source of carbon with hydrogenation (using renewable hydrogen) as a possible approach for transforming CO2 into value-added chemicals and fuels creating an artificial carbon cycle. This study investigated the catalytic performance of γ-alumina-supported copper oxide for the reverse water gas shift reaction. The catalytic nanoparticles were characterized by various analytical techniques such as XRD, SEM, TPR etc. The reverse microemulsion (RME) technique was deployed for the synthesis of highly porous CuO supported on γ-Al2O3 with a specific surface area of 369.69 m2/g. The catalytic performance of the synthesized catalyst was evaluated under various operating conditions (300-500 °C and 10,000 to 200,000 mL gcat-1 h-1). Results showed 100% CO selectivity with excellent CO2 conversion (near to equilibrium, 53%) at 500 °C. Catalyst stability test was conducted for 95 h at 1 atm and 600 °C with varying space velocities. RME-prepared Cu/γ-Al2O3 catalyst showed excellent catalytic stability and CO2 conversion of 61% at GHSV of 60,000 and 41% at GHSV of 200,000 mL gcat-1 h-1. This study showed that reverse microemulsion is a promising method for developing catalysts and enhancing their functionality in thermo-catalytic reactions. The CO2 adsorption mechanism was studied via in-situ FTIR. At 300 °C and low gas concentration, CO2 was physically adsorbed on the surface as carbonates and the persistent formation of CO was observed. A rate equation was suggested along and kinetic parameters were estimated in order to extrapolate the experimentally measured data. The resulting reaction rate expression with the estimated parameters was successfully implemented under various operating conditions to evaluate the catalytic performance.