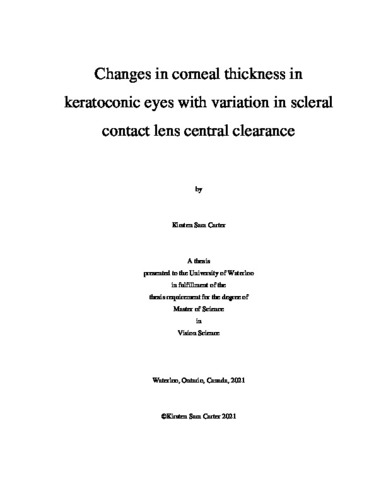 Purpose: There has been a resurgence of scleral lens wear, particularly for patients with corneal ectasia, such as keratoconus. This method of lens correction provides good visual acuity for these individuals and is often a clinically sought-after lens modality where others fail. The scleral lens vaults the ocular surface over a fluid reservoir, which provides additional comfort and neutralization of irregular astigmatism. The height of this fluid reservoir is often referred to as the central corneal clearance of the scleral lens. The long-term ocular physiological effects of scleral lens wear have not been definitively established. It is hypothesized that there is a low-grade level of corneal edema secondary to corneal hypoxia due to the barrier of the lens and fluid reservoir. There is an unanswered clinical question of “how much is too much?” with regards to central corneal clearance, in terms of limiting the amount of oxygen reaching the eye. This question has primarily been explored in the healthy rather than keratoconic population, as well as over a shorter period of wear, typically eight hours. The purpose of this study was to investigate the longer-term effects of scleral lens wear on a keratoconic population and explore differences in the effect on corneal physiology between two lenses of different targeted central clearances. Methods: Two pairs of scleral lenses of targeted central clearances of 150 (low clearance) and 250 μm (high clearance) were fit on eight male participants with keratoconus, aged 31.6 (± 6.6) years. Each pair of lenses was worn for a 3-week period. At baseline and follow-up, central and paracentral corneal thickness was measured in the horizontal, vertical, and two oblique meridians at 8mm chord lengths. Total corneal thickness measurements were taken with the Oculus Pentacam® HR (OCULUS, Wetzlar, Germany) and the Spectralis® OCT (Heidelberg Engineering, Heidelberg, Germany), along with epithelial thickness measurements with the Spectralis® OCT. Results: Scleral lens wear with both the low and high clearance lens consistently resulted in a statistically significant increase in corneal thickness from baseline. There were statistically significant increases in corneal thickness when comparing follow-up measurements from the low to high clearance lens measured with both instruments for the vertical meridian (Spectralis OD p=0.003, OS p=0.01; Pentacam OD p=0.014, OS p<0.001). In other cases, the Pentacam® showed a significant increase in corneal thickness from the low to high clearance lens for the horizontal (OS p<0.001) and oblique meridian involving the inferior temporal-superior nasal regions (OD p=0.006). For the oblique meridian involving the superior temporal-inferior nasal regions, both the Spectralis® and Pentacam® HR measured a significant difference between lenses for left eye data (Spectralis OS p=0.002; Pentacam OS p<0.001), but neither detected a significant difference between lenses for the right eye (Spectralis OD p=0.484; Pentacam OD p=0.436). For corneal epithelial thickness measurements, there were significant differences only noted in the left eye, oblique meridian (superior temporal-inferior nasal) when comparing the low to high clearance lens follow-ups (increase in epithelial thickness, p=0.007), and the baseline to low clearance lens follow-up visit (decrease in epithelial thickness, p=0.014). These results were inconsistent and minimally significant. Individual patterns with corneal thickness difference mapping revealed patterns of both diffuse and sectoral swelling, with a general preference for the nasal side when measured with the Spectralis®, and on the temporal side with the Pentacam®. Patterns of corneal swelling did not appear to be associated with the individual’s disease stage. Other individual differences were noted and described. Associations were sometimes noted between central total corneal swelling and decreases in visual acuity; locations of total corneal and corneal epithelial swelling; and total corneal swelling and position of lens decentration, however, links between these factors were not consistently observed. Bulbar hyperemia appeared to increase descriptively with scleral lens wear. Subjective comfort varied descriptively in lenses of varying central corneal clearance, with less comfort noted while wearing the higher clearance lens. Conclusion: A 3-week period of scleral lens wear in the keratoconic population has been shown to induce low-grade corneal edema, regardless of whether low or high targeted central lens clearance has been fit. A higher targeted level of central corneal clearance may induce greater swelling, that is possibly location-dependent in this population. Individuals with keratoconus can exhibit distinctive patterns of corneal swelling in response to scleral lens wear, which may be independent of their disease stage, and should be considered in addition to the general effect of scleral lens wear in this population.