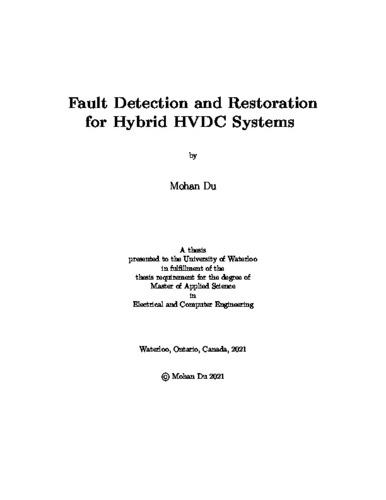 As a promising solution for connecting remote, asynchronous, and intermittent renewable energy resources with existing AC grids, high voltage direct current (HVDC) systems are being built in many countries around the world. HVDC lines are used for bulk power transmission over long distances with low power losses and high security, reliability, and system stability. With the development of various HVDC technologies, HVDC systems in various forms are being constructed, and eventually will be connected to each others. The expansion of HVDC grids may result in systems with HVDC converters that have different fault blocking capabilities. Even though considerable relaying and restoration algorithms are developed for HVDC systems, many of these algorithms are only applicable to one specific type of HVDC converter. This thesis presents a universal protection scheme that can be implemented in HVDC grids with different topologies and with converters that have different fault blocking capability, i.e., half-bridge modular multilevel converter (HB-MMC) and full-bridge MMC (FB-MMC). A fault current calculation method is developed first to calculate the current derivative of each line in an HVDC system during a DC fault. The developed method calculates fault currents by solving matrix-form differential equations, whose matrices can be automatically built based on system parameters and without requiring any information corresponding to the fault condition. The calculation method can be used in HVDC grids with various topologies, structures, and fault types. The universal protection scheme consists of a universal relaying scheme and a universal restoration algorithm. The universal relaying scheme provides a systematic approach to design the current derivative-based relaying algorithm for a specific HVDC system. The relaying algorithm compares the locally measured current derivative with thresholds to detect DC faults in HVDC systems and to differentiate between internal and external faults. Instead of using the traditional method, which is based on extensive time-consuming electromagnetic transient (EMT) simulations, to determine the relay settings, this thesis developed a systematic method to calculate the settings. The universal restoration algorithm can quickly and reliably restore a hybrid HVDC system with different types of converters including HB-MMCs and FB-MMCs. Study results show that (i) the matrix-form differential equations can calculate the current derivative of each line right after a DC fault accurately and quickly, (ii) for most HVDC configurations and fault scenarios, settings of each relay can be calculated using the matrix-form differential equations, (iii) the developed relaying algorithm selectively detects internal faults in a few milliseconds and meets the requirement of dependability and security, (iv) the developed restoration algorithm restores hybrid HVDC systems with low voltage oscillations and limited inrush currents, and (v) the developed relaying scheme and restoration algorithm are flexible and can be employed to HVDC grids with different combinations of converter topologies and technologies with limited modifications.