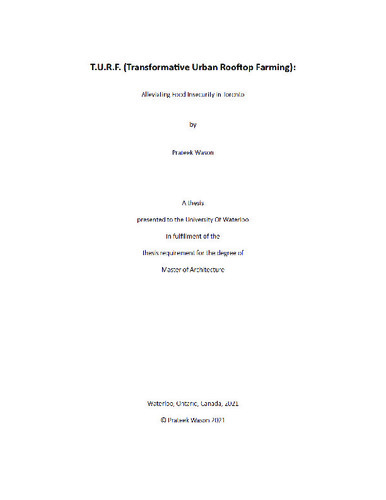 One in every eight Canadian households is food insecure. This accounts for 12.7% of the total population of Canada. Food insecurity, which refers to inadequate and insecure access to food due to social, physical, and economic constraints, has a severe effect on an individual’s health and well-being. The city of Toronto has many neighborhoods that face food insecurity within their communities. The city also has an abundance of vacant rooftop space that does not compete with other urban uses. How can urban agriculture on these vacant rooftops help in solving the problems of food insecurity in these vulnerable neighborhoods? Current urban agriculture practices in Toronto are limited to seasonal community farms aimed to feed a handful of the population and focus on enriching the community. However, research dictates that rooftops can be used for food production using the principles and technologies of building integrated agriculture (BIA). But little research is available to discuss how urban agriculture on a building can aid the food insecure population of the city. BIA on underutilized rooftops across the food insecure neighborhoods in the city of Toronto can act as an agent to alleviate the challenge of food insecurity. This research involves analyzing existing buildings in dense urban environments that have incorporated BIAs and understanding the different farming systems used by these buildings. Neighborhoods in Toronto that suffer from food insecurity are treated as test sites for implementing the researched BIA systems. The BIA proposal also aims to track the changes in the day-to-day life of the building residents. Integration of BIA within the city is beneficial for the people, the urban environment, and climate change in general. This local production of food will not only contribute towards alleviating food insecurity but also bring people closer to food production and reduce the impacts of food production on the climate by reducing food miles.