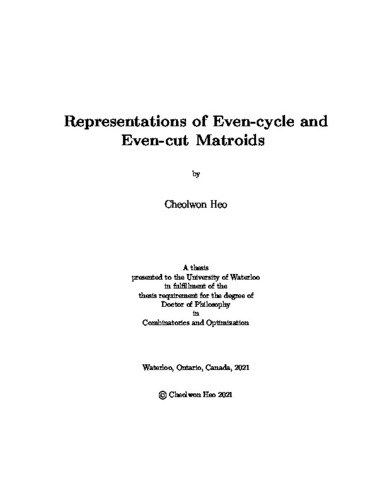 In this thesis, two classes of binary matroids will be discussed: even-cycle and even-cut matroids, together with problems which are related to their graphical representations. Even-cycle and even-cut matroids can be represented as signed graphs and grafts, respectively. A signed graph is a pair $(G,\Sigma)$ where $G$ is a graph and $\Sigma$ is a subset of edges of $G$. A cycle $C$ of $G$ is a subset of edges of $G$ such that every vertex of the subgraph of $G$ induced by $C$ has an even degree. We say that $C$ is even in $(G,\Sigma)$ if $|C \cap \Sigma|$ is even. A matroid $M$ is an even-cycle matroid if there exists a signed graph $(G,\Sigma)$ such that circuits of $M$ precisely corresponds to inclusion-wise minimal non-empty even cycles of $(G,\Sigma)$. A graft is a pair $(G,T)$ where $G$ is a graph and $T$ is a subset of vertices of $G$ such that each component of $G$ contains an even number of vertices in $T$. Let $U$ be a subset of vertices of $G$ and let $D:= delta_G(U)$ be a cut of $G$. We say that $D$ is even in $(G, T)$ if $|U \cap T|$ is even. A matroid $M$ is an even-cut matroid if there exists a graft $(G,T)$ such that circuits of $M$ corresponds to inclusion-wise minimal non-empty even cuts of $(G,T)$.\\ This thesis is motivated by the following three fundamental problems for even-cycle and even-cut matroids with their graphical representations. (a) Isomorphism problem: what is the relationship between two representations? (b) Bounding the number of representations: how many representations can a matroid have? (c) Recognition problem: how can we efficiently determine if a given matroid is in the class? And how can we find a representation if one exists? These questions for even-cycle and even-cut matroids will be answered in this thesis, respectively. For Problem (a), it will be characterized when two $4$-connected graphs $G_1$ and $G_2$ have a pair of signatures $(\Sigma_1, \Sigma_2)$ such that $(G_1, \Sigma_1)$ and $(G_2, \Sigma_2)$ represent the same even-cycle matroids. This also characterize when $G_1$ and $G_2$ have a pair of terminal sets $(T_1, T_2)$ such that $(G_1,T_1)$ and $(G_2,T_2)$ represent the same even-cut matroid. For Problem (b), we introduce another class of binary matroids, called pinch-graphic matroids, which can generate expo\-nentially many representations even when the matroid is $3$-connected. An even-cycle matroid is a pinch-graphic matroid if there exists a signed graph with a blocking pair. A blocking pair of a signed graph is a pair of vertices such that every odd cycles intersects with at least one of them. We prove that there exists a constant $c$ such that if a matroid is even-cycle matroid that is not pinch-graphic, then the number of representations is bounded by $c$. An analogous result for even-cut matroids that are not duals of pinch-graphic matroids will be also proven. As an application, we construct algorithms to solve Problem (c) for even-cycle, even-cut matroids. The input matroids of these algorithms are binary, and they are given by a $(0,1)$-matrix over the finite field $\gf(2)$. The time-complexity of these algorithms is polynomial in the size of the input matrix.