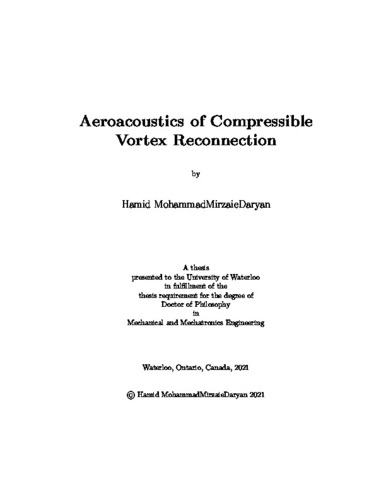 Aeroacoustics is a key focus in the design of propulsion, energy, and transportation systems. Noise generation in these systems is caused by the unsteadiness of the flow and simplified acoustic models are used to approximate the noise emission. Although the physical mechanisms of flow-generated noise remain plagued with a lot of uncertainty, we know that coherent structures play a significant role in this process. To understand the noise generation mechanisms, first, a thorough study of the physics of coherent structures and their self- and mutual interactions, as the dominant acoustic sources, is critical. Thus far, despite many experimental and numerical studies, there has not been consensus on the importance of vortex interactions; while, dominant acoustic sources (in jet noise) have been often attributed to vortex pairing. In this thesis, for the first time, the role of vortex reconnection, which leads to a violent topological change and rapid repulsion of vortex lines, in aeroacoustic noise generation is explored. For this, using direct numerical simulation of the compressible Navier-Stokes equations, the sound generation mechanism of initially subsonic viscous vortex reconnection at the vortex Reynolds number $Re$($\equiv$ circulation/kinematic viscosity)$=1500$ is studied through decomposition of Lighthill's acoustic source term. The Laplacian of the kinetic energy, flexion product, enstrophy, and the deviation from the isentropic condition provide the dominant contributions to the acoustic source term. The overall (all time) extrema of the total source term and its dominant hydrodynamic components scale linearly with the reference Mach number, $M_o$; the deviation from the isentropic condition shows a quadratic scaling. The significant sound arising from the flexion product occurs due to the coiling and uncoiling of the twisted vortex filaments wrapping around the bridges when a rapid strain is induced on the filaments by the repulsion of the bridges. The spatial distributions of the various acoustic source terms reveal the importance of mutual cancellations among most of the terms; this also highlights the importance of symmetry breaking in the sound generation during reconnection. Compressibility acts to delay the start of the sequence of reconnection events, as long as shocklets, if formed, are sufficiently weak to not affect the reconnection. The delayed onset has direct ramifications on the sound generation by enhancing the velocity of the entrained jet between the vortices and increasing the spatial gradients of the acoustic source terms. Despite a subsonic reference Mach number of $M_o=0.9$, reconnection could lead to shocklet formation where acoustic sources containing the Laplacian of the kinetic energy, density gradient, dilatation, and their interactions become dominant. Compressibility also intensifies the spatial distribution and sharp rise of the near-field low pressure which fades away in time. Consistent with the near-field pressure, the overall maximum instantaneous sound pressure level in the far field has a quadratic dependence on $M_o$. At low $M_o$, the time-averaged sound directivity takes a quadrupole-like pattern. By increase of $M_o$, not only the sound level intensifies, but the directivity pattern becomes elongated in the advection direction. Therefore, vortex reconnection, particularly at high reference Mach number, is recognized as a dominant sound-generating event.