On the structure of invertible elements in certain Fourier-Stieltjes algebras 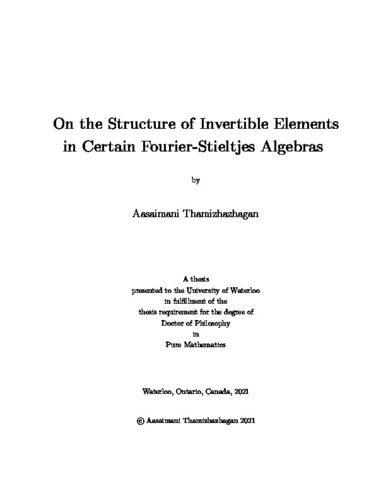 Let $G$ be a locally compact group. The Fourier-Stieltjes and Fourier algebras, $B(G)$ and $A(G)$ are defined by Eymard to act as dual objects of the measure and group algebras, $M(G)$ and $L^1(G)$, in a sense generalizing Pontryagin duality from the theory of abelian locally compact groups. Hence there is natural expectation that properties of the latter two algebras ought to be reflected in the former. Joseph L. Taylor wrote a series of ten papers within the span of 1965 - 1972 studying the structure of convolution measure algebras $\mathfrak{M}$ (important examples are $M(G)$, measure algebra and $L^1(G)$, group algebra for an locally compact abelian group $G$) and characterizes the invertible elements in a measure algebra of a locally compact abelian group. Several results indicated that the spectrum $\Delta$ of $M(G)$ is quite complicated, as is the problem of deciding when $\mu \in M(G)$ is invertible. He proved that the spectrum of any abelian measure algebra can be represented as the space $\hat{S}$ of semicharacters on some compact semigroup $S$. However, for $M(G)$ we have no concrete description of the corresponding $S$ or $\hat{S}$. Though this failed to give a really satisfactory description of the spectrum of $M(G)$, using this description and certain semigroup techniques, he proved a theorem which significantly simplifies the problem of deciding when a measure in $M(G)$ is invertible. Basically, this theorem asserts if $\mu^{-1}$ exists it must lie in a certain "small" subalgebra of $M(G)$. This reduces the invertibility problem in $M(G)$ to the same problem in an algebra which is far less complicated than $M(G)$. He does so by identifying the closed linear span of all maximal subalgebras which are isometrically isomorphic to a group algebras of some locally compact abelian group for his convolution measure algebras. He calls this the 𝘴𝘱𝘪𝘯𝘦 of $\mathfrak{M}$. In 2007, Nico Spronk and Monica Illie develop the non-commutative dual analogue of the spine of an abelian measure algebra, provide an explicit dual description of how the above could be realised in abelian Fourier-Stieltjes algebra and conjecture if the invertible elements in general $B(G)$ admit such a dual characterisation. In this thesis, we bring together a class of interesting examples within Lie groups, in particular, many totally minimal groups, classical motion groups and the $ax+b$-group that witness the desired characterisation of invertible elements in their Fourier-Stieltjes algebra.