Drawing as an Encoding Tool: Generalizing to Emotional and More Complex Stimuli 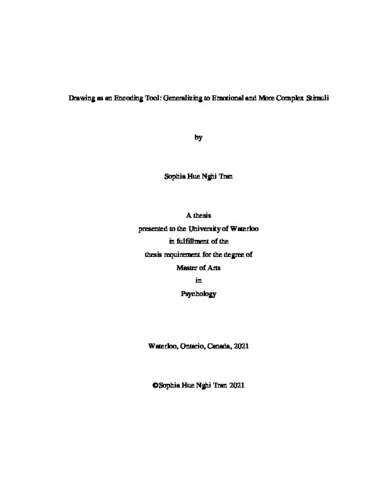 Drawing as an Encoding Tool: Generalizing to Emotional and More Complex Stimuli (933.8Kb)

Drawing, as an encoding strategy has been shown to provide robust memory benefits primarily to memory for list of words. Past research has also shown that emotional compared to neutral information is typically better remembered. In this thesis, we examined the extent and limitations to which the memorial benefits conferred from drawing at encoding extended to emotional materials and to more complex stimuli such as sentences. In Experiment 1, 50 young adult undergraduate students were presented with 42 positive, negative, and neutral words, one at a time, in random order. They were asked either to write out or to draw a picture of the referent of the word, with cue-type intermixed, making the word valence and encoding prompt manipulations within-subject. Participants were later given five minutes to freely recall as many words as possible by writing them out. Recall was higher for words drawn than written at encoding. What is more, the magnitude of the boost was further enhanced for negative compared to positive and neutral words. In Experiment 2, we examined the generalizability of this drawing benefit to memory for more complex materials - neutral sentences - which are more linguistically and semantically complex than single words. In Experiment 2, another sample of 50 young adult undergraduate students were presented with a total of 18 sentences, one at a time, with random prompts to either write or draw intermixed. In Experiment 3, we examined whether emotional valence would again combine with the magnitude of the drawing benefit, as it had in Experiment 1, even when the to-be-remembered information was sentences. Experiment 3 was identical, but sentences were either positive, negative or, neutral in valence (8 of each type; 24 sentences in total, half drawn and half written at encoding). In both of the experiments, following encoding, participants were then given five minutes to freely recall as many sentences as possible in written format. In both, recall was higher for sentences drawn than written at encoding. As well, in Experiment 3, recall for negative sentences was significantly higher than for neutral or positive sentences; there was, however, no interaction. These findings demonstrate that the memorial benefit from drawing at encoding a) extends to emotional materials, and b) is evident even when to-be-remembered information is more complex. Our findings also suggest that drawing and emotionality independently enhance retention of words.