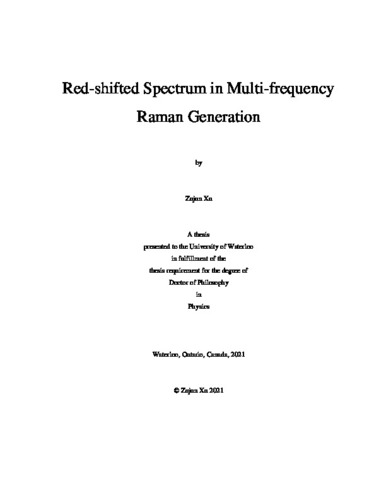 Multi-frequency Raman Generation (MRG) is a promising technique to generate few-femtosecond to sub-femtosecond pulses with high energy conversion efficiency. During the transient MRG experiments coupled with two chirped pulses in Donna Strickland’s lab, phenomenon of red-shifted spectrum occurring and disappearing as the change of the instantaneous frequency separation between the pump pulse and the Stokes pulse was observed. The red-shifted spectrum may help us to get higher power pulses. We are interested in what the red-shifted spectrum is, where it comes from and how it behaves. The pulse measuring method Frequency Resolved Optical Gating (FROG) is applied to study the red-shifting effect, and a single shot FROG setup is built in the lab for pulse measurement. Different sets of experiment were carried out to study the red-shifted MRG, such as MRG with different instantaneous frequency separation of the pumping pulses, the effects from the intensity of the pump, and the chirp sign of the pump pulses. To begin with, the first anti-Stokes Raman order is measured with different instantaneous frequency separations. The reconstructed results from the FROG program give similar results as what we observed from the auto-correlator and spectrometer, but with much more details and higher resolution. As the instantaneous frequency separation decreases, the spectrum of the first anti-Stokes Raman order transforms from a single peak to a head-shoulder pattern, and then reaches a spectrum with two discrete peaks. For the intensity effects, the higher the pulse intensity goes, the larger the separation of the two spectral peaks becomes. When the pump pulses are negatively chirped, the red-shifting of the Raman order is not obvious. After investigating the cases with the spectrum of Raman order with two separated peaks, we think that the Raman order is a mixing of two pulses. Then, a double-pulse model, where the total pulse is made up of the Raman pulse and the red-shifted pulse, was introduced to describe the phenomenon. Simulation with the double-pulse model achieved lower errors as compared to the results from the FROG program. The results show that the Raman pulse stays similar to the pump pulses, while there is extra higher order phase for the red-shifted pulse. The experimental results along with the double-pulse model simulation suggest that the Raman pulse comes from the regular Raman scattering of MRG, while the red-shifted part is generated from the Raman scattering with the intensity dependent two- photon Stark shift.