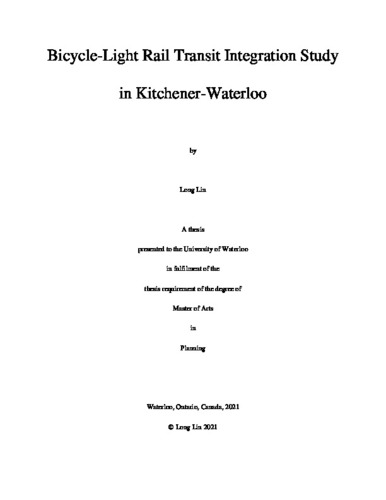 Active transportation, such as walking and cycling, are typically considered the first and last mile options for people who live close to transit corridors or transit hubs. Compared to walking, cycling allows faster travel and longer trip distances can help to increase transit catchment area. Bicycle-transit integration has been discussed by many researchers around the world, and it has become a popular topic alongside the movements to reduce carbon emissions. This thesis aims to understand what conditions are necessary for existing LRT riders to use or will be encouraged to use bicycles as a feeder mode to access or egress from the LRT stations, specifically the role of bicycle infrastructure by using the City of Kitchener and the City of Waterloo (KW) as a case study. Studies showed that bicycle infrastructure plays a crucial role in promoting bike-transit integration by providing convenient, fast, and safe access and egress stages during a trip within public transportation. However, a review of the literature identified three gaps where existing LRT-related literature has mostly focused on large cities and rarely on mid-size cities like KW. Minimal research has been conducted on bicycle infrastructure in a mid-sized city context. In addition, most bicycle-transit integration studies have focused on bicycle–commuter rail or bicycle–metro subjects, with less discussion of LRT. A better understanding of bicycle–LRT integration in mid-sized cities is needed. The thesis study used a quantitative approach in which the researcher designed and distributed online web-based surveys via social media and collected the data during the COVID-19 pandemic, where physical distancing rules and restrictions on face-to-face research was prohibited. The analysis results showed a great potential for promoting bicycle–LRT integration from the participants’ feedbacks. Separated bike lanes and on-street painted bicycle lanes were the most important aspects of promoting such actions, along with bicycle parking at LRT stations, cycling network connectivity, designated signages and traffic lights. The study’s regression analysis showed that the more important the participants thought that bicycle infrastructure elements affected their decisions to use bicycles as a feeder mode to access or egress LRT stations, the more likely they were to use bicycles, if these bicycle infrastructures satisfied their needs. The overall results are consistent with previous studies examining bicycle infrastructure importance in encouraging people to cycle. The lack of bicycle infrastructures, such bike share, separated bicycle lanes, designated signage, and parking at the current stage, were cited as reasons that discourage people from using bicycles. Transit accessibility in cities is a topical and urgent issue. Municipal planners should fully embrace denser, mixed-use growth that will support more active and public transportation and transit-oriented developments along the LRT corridor. Planners should play multiple roles in such projects by fulfilling professional duties, providing advice, and advocating for projects that support bicycle–LRT integration. In addition, planners should ensure people with lower-income and minority groups’ accessibility of the bicycle and bicycle infrastructure to ensure accessibility equity.