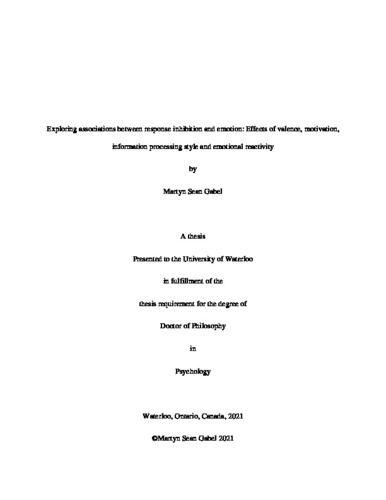 Several theoretical accounts postulate an influence of mood on response inhibition, a central component of executive function (EF) that refers to withholding pre-potent responses that are inappropriate within a particular goal-context. The first of these accounts, cognitive load theory, assumes that all emotional arousal (positive or negative) places demands on EF via task-unrelated thoughts and thus increased emotional experience is more likely to decrease EF performance. The mood-as-information theory suggests that negative mood indicates threat and promotes an analytic thinking style which will improve EF skills, such as response inhibition, that should benefit from a more analytic approach to information processing, whereas positive mood stimulates a heuristic thinking style which will have the converse effect. Finally, motivational accounts suggest that emotional valence (positive vs. negative) is less important than the underlying motivational system that is engaged through the emotional experience. Herein, it is predicted that response inhibition will be bolstered by approach motivation (e.g., anger, curiosity) but hindered by avoidance motivated experiences (e.g., anxiety). Given inconsistent research findings in the literature regarding the interplay of mood and response inhibition, my master’s research examined emotional reactivity as a potential moderator of this relationship. Emotional reactivity is stable trait that denotes the typical rapidity, intensity, and duration of an emotional response. It was predicted that individuals who experience stronger, more frequent, and longer-lasting negative emotions (i.e., those higher in reactivity) would be more accustomed to the experience of a negative mood and thus able to utilize an analytic thinking style to enhance their inhibitory performance without experiencing an associated increase in cognitive load – whereas the opposite would occur for those lower in reactivity (leading to a decrement in inhibitory performance). The interaction of emotional reactivity and negative affect emerged as a significant predictor of response inhibition in the way that was hypothesized. The current dissertation aimed to replicate and extend these findings. Study 1 was conceptually similar to my master’s research but used an experimental design to induce negative and positive mood states (vs. exploring naturally occurring fluctuations in mood). Similar to results from my master’s research, participants lower in reactivity performed more poorly on a task of response inhibition with increasing levels of negative mood while those higher in reactivity demonstrated the opposite trend. Additionally, individuals lower in reactivity performed more poorly in the negative mood condition than in the positive mood condition while those higher in reactivity performed comparably across conditions. These findings further support emotional reactivity as a moderator of the mood-inhibition relationship and are consistent with the suggestion that negative mood may promote an analytic thinking style that can be utilized by individuals who are accustomed to unpleasant emotional experiences (i.e., high reactive individuals) but engenders greater cognitive load for those who are not (i.e., low reactive individuals). The affective certainty model, which predicts interference in EF tasks when moods are trait-inconsistent emerged as a model that shared consistency with these results and was compatible with both the mood-as-information and cognitive load theories. Predictions stemming from mood-as-information theory were more directly assessed in Study 2, which manipulated thinking style (analytic vs. heuristic) through a Navon-like induction. In the heuristic condition, based on the finding that people are generally in a positive mood state and that consequently they tend to employ a heuristic thinking style it was predicted that there would be a replication of the interaction from my master’s research where negative affect would instill cognitive load for low but not high reactive individuals. Consistent with this prediction, as well as findings from Study 1 and my master’s work, increasing negative affect was associated with better inhibitory performance for individuals higher in reactivity while those lower in reactivity demonstrated the opposite trend. In the analytic condition, it was predicted that focusing on local information would engender an analytic thinking style which would be enhanced by negative affect and override cognitive load instilled by this affective state. Consistent with this prediction, participants’ performance improved with increasing levels of negative affect regardless of emotional reactivity. In neither condition, however, was there compelling evidence that the pattern of results could be attributed to the manipulation of thinking style. Finally, Study 3 tested predictions following from motivational accounts of affective influences on EF by inducing emotions (anger, anxiety and boredom) that tap into differing motivational systems (approach vs. avoidance). Contrary to my hypothesis, response inhibition was comparable across conditions. However, when negative arousal was considered in the model, the anxiety and anger conditions diverged such that as negative affect increased in the anxiety condition performance worsened. Conversely, as negative affect increased in the anger condition performance improved. Emotional reactivity was not predictive of performance across conditions. Findings across studies in my doctoral work find consistent support for the affective certainty and cognitive load hypotheses. Study 2 provided partial support for the mood-as-information theory while Study 3 found partial support for the motivational accounts of the EF-mood relationship. Overall, results help to explain inconsistent research findings with the inclusion of an individual differences factor, emotional reactivity, which emerged as a powerful moderator that makes divergent predictions about the effects of affect on response inhibition based on what is affectively normal at an individual level.