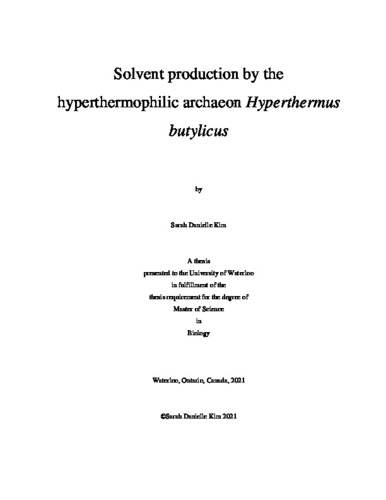 Hyperthermus butylicus is one of the few hyperthermophilic (organisms that thrive in temperatures 80°C and above) archaea that can produce 1-butanol as a major fermentation end-product. The reported end-products (acetone, isopropanol, acetate, and butyrate, in addition to 1-butanol) bare similarity to that of solvent producing clostridial species, and an alcohol dehydrogenase (ADH) (Hbut_0414) is found to be responsible for the production of 1-butanol in H. butylicus. It was not clear, however, if ethanol is produced and which pathway(s) and key enzymes are involved in the solvent production by H. butylicus. To gain a greater understanding of the metabolism of this microorganism, the aims of this thesis were to examine its growth and solvent production. Through optimization experiments for H. butylicus growth conditions, it was determined that a pH of 7.0, sulfur concentration of 10.0 g/L, and H2 pressure of 3.0 atm (over-pressurized) resulted in the highest growth (> 1.0 x 10^8 cells/mL). It was found that precipitated sulfur from Sigma-Aldrich was strictly required. Using gas chromatography, the fermentation end-products ethanol, acetone, isopropanol, and 1-butanol in batch cultures of H. butylicus were detected. The synthesis of these solvents was found to be growth dependent where an increase in growth correspondingly resulted in an increase in solvent production, demonstrating significance between metabolic activity and growth in the microorganism. The addition of sodium acetate and sodium butyrate in the growth media affected both the growth and solvent production. In cultures supplemented with acetate, a decrease in growth was observed compared to cultures supplemented with butyrate and without any supplementation. Supplementing the growth medium with 5- and 15-mM of sodium acetate and sodium butyrate resulted in an increase in ethanol and 1-butanol, respectively, indicating that H. butylicus could utilize these organic acids for producing their corresponding alcohols. Bioinformatic analyses (BLAST, HMM) showed no significant similarity for key solvent-producing enzymes was found in H. butylicus when searched against enzymes produced by other existing butanol producing organisms. It is concluded that H. butylicus is the first hypertherthermophile capable of acetone-butanol-ethanol (ABE) fermentation, but the responsible pathway remains unknown. It is proposed that a novel butanol production pathway in H. butylicus exists, which may share similarities to the ABE pathway in C. acetobutylicum, keto-acid pathway in Saccharomyces cerevisiae, butyraldehyde dehydrogenase pathway in C. saccharoperbutylacetonicum N1-4, the two-step PDC/ADH pathway in Thermococcus guaymasensis, and an organic acid reduction pathway involving an aldehyde:ferredoxin oxidoreductase. Further investigation is required to enhance the understanding of H. butylicus’ metabolism. Future studies for the biochemical determination of key enzymes, quantifying the amount of organic acids consumed, and the pH dependency of solvent production in the presence and absence or organic acids will provide insight into revealing pathways responsible for the solvent production in H. butylicus.