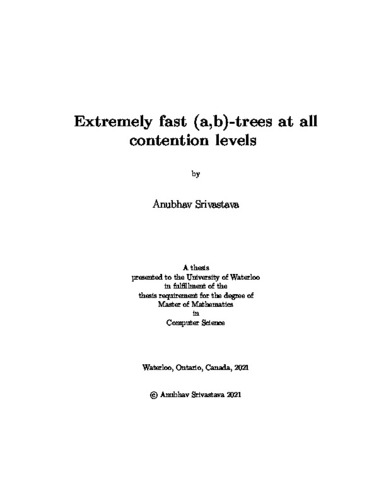 Many concurrent dictionary implementations are designed and evaluated with only low-contention workloads in mind. This thesis presents several concurrent linearizable (a,b)-tree implementations with the overarching goal of performing well on both low- and high-contention workloads, and especially update-heavy workloads. The OCC-ABtree uses optimistic concurrency control to achieve state-of-the-art low-contention performance. However, under high-contention, cache coherence traffic begins to affect its performance. This is addressed by replacing its test-and-compare-and-swap locks with MCS queue locks. The resulting MCS-ABtree scales well under both low- and high-contention workloads. This thesis also introduces two coalescing-based trees, the CoMCS-ABtree and the CoPub-ABtree, that achieve substantially better performance under high-contention by reordering and coalescing concurrent inserts and deletes. Comparing these algorithms against the state of the art in concurrent search trees, we find that the fastest algorithm, the CoPub-ABtree, outperforms the next fastest competitor by up to 2x. This thesis then describes persistent versions of the four trees, whose implementations use fewer sfence instructions than a leading competitor (the FPTree). The persistent trees are proved to be strictly linearizable. Experimentally, the persistent trees are only slightly slower than their volatile counterparts, suggesting that they have great use as in-memory databases that need to be able to recover after a crash.