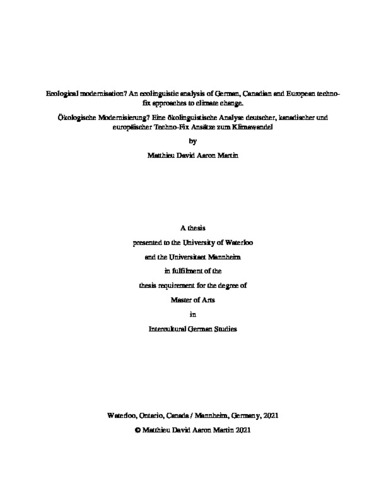 Analyzing how climate change is situated in ‘discourse,’ the socially constituted and constitutive use of language, can tell a great deal about how the human subject sees itself in relation to nature and what problematic elements of the social realities it may consequently reproduce. The discourse analyzed here in a corpus of five publications, two Canadian, one German, and two EU, more precisely exemplifies a discourse of “ecological modernisation” which Jänicke (2008) defines as “systematic eco-innovation and its diffusion” (p. 557). In other words, it is the techno-fix approach of creating advanced technology to solve ecological problems. Two research questions have guided the inquiry: first, how does the way in which Canadian, German, & EU political elites address climate change reflect human beings’ relation to nature? Second, what social and ecological reality may this kind of discourse and its corresponding ethical claims encourage and/or continue to constitute? Drawing from Fairclough’s (2015) critical discourse analytical methods as well as elements from Stibbe’s (2021) ecolinguistic framework, the analysis is organized according to five primary cognitive discourse structures: metaphor, framing, evaluation, salience & erasure. It is shown that the discourse portrays responses to climate change as a wartime journey toward an attainable destination against the conceptualized opponent of “climate change.” Moreover, the corpus discourse frames action and nature through a capitalist lens and prioritizes economic growth and technological advancement while discursively erasing elements of the non-human world. It is argued that the ethically intertwined discourse of ecological modernisation as represented in the corpus promotes a social reality that is ecologically ambivalent, appearing at face value to reconcile environmental problems but with a technological and discursive approach which nonetheless reinforces the exploitative relationship between industrial human society and nature.